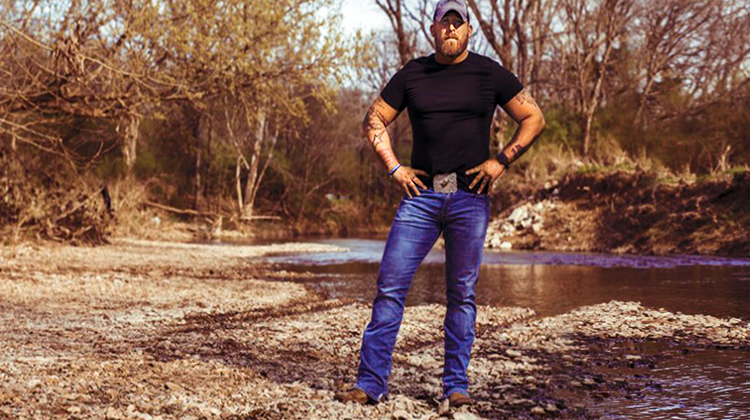 Jesse Keith Whitley has found the perfect way to honor his father, the late country legend Keith Whitley. He’s dedicating his new single “Try to Change My Ways” to his dad and releasing it on May 9th, the 31st anniversary of Keith Whitley’s shocking and untimely death. Whitley was pronounced dead of alcohol poisoning May 9th, 1989, at age 33, just as his career was ablaze with No. 1 hits like “Don’t Close Your Eyes” and “When You Say Nothing at All,” along with widespread industry acclaim. At the time, he was married to fellow singer Lorrie Morgan, and the two epitomized the ideal of a Nashville glam couple.

“Try to Change My Ways” isn’t about a guy who’s bent on reform. On the contrary, it’s a defiant statement with a clear challenge in the opening line: Just let ‘em try to change my ways. You can practically see Whitley’s fists shake as he sings to a fiery mix of bluegrass banjo and searing guitars that might conjure up shades of Steve Earle or other outlaw acts. Whitley was not quite two years old when his father died, but he’s informed and assured enough to tell Sounds Like Nashville, “I think it embodies the spirit of my dad and what he stood for.” One particular lyric truly hits home for Whitley as he reflects on his father, who was born in Sandy Hook, Kentucky. “There is a line that says, My blood runs through these Kentucky hills, and that reminds me of my father,” says young Whitley. “Every time I drive through Kentucky, I think about him and just the Whitley family in general.”

A few years back, Whitley co-wrote the song “Shadows” about his father’s country music legacy. When listening to “Try to Change My Ways,” it would obviously be surmised that Whitley wrote that as well. But it was actually penned by Kirk Roth and Robert Kemp, who came up with such a relatable scenario that Whitley could practically claim it as his own. “I did not write that song,” he notes for clarity, “but I loved it at the first listen. What I liked is that it doesn’t just talk about one class of people. Like the part about standing up for the USA, well, that’s everybody. I think we’re all together on that. This song is a little different for me,” he adds with a slight laugh. “I’m wanting to find out who I am as an artist.” The aggressive-sounding anthem, replete with such proclamations as I’m gonna hunt and I’m gonna pray, would hardly fit Keith Whitley’s style, but Jesse Keith believes that dad would have been on board. “I had no idea that this would be a single,” Whitley says. “I had a couple of other ideas but this won out. I decided later that I would dedicate the song to my father.”

“Try to Change My Ways” marks the first single from an upcoming album project, due this year. But, as is the case with his musical contemporaries, the tour portion of Whitley’s career lies in limbo due to uncertainties about the coronavirus spread. “We have had to cancel a lot of dates,” Whitley says with a certain air of resignation. “Really, I should be out on the road right now, but we all know that’s not happening. We have been able to move some dates to the fall and winter, so that’s good.”

More than 30 years after his death, Keith Whitley still exacts a tangible influence on today’s country. Whitley left behind a rich musical catalog that includes posthumous No. 1 hits “I Wonder Do You Think of Me” and “It Ain’t Nothin’.” He established himself with a versatile, smooth baritone voice that was raised on bluegrass – he became the lead singer for Ralph Stanley’s band in 1974 while still in his teens – but proved equally at home in mainstream country.

“Guys like Chris Young and Dylan Scott were influenced by my dad, and I hear it in their music,” Whitley points out. “There is a cool video you can find on YouTube with Tracy Lawrence, Jason Aldean, and Luke Bryan doing [Whitley’s 1990 hit] ‘I’m Over You.’ Tracy was a big fan of my dad’s and he was on the tribute album that came out many years ago.” That 1994 record, Keith Whitley: A Tribute Album, also featured Alan Jackson, Joe Diffie, and Alison Krauss and Union Station, among many others. “One day, we’ll look at doing another tribute album,” Whitley says. “There is also a big push to get my dad into the Country Music Hall of Fame and I think he deserves that. Right now, I’m just proud to honor him with this single.”