Over R3 Million stolen at FNB Stadium after Concerts 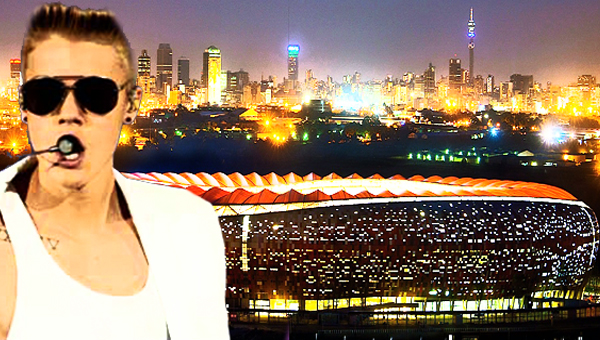 Its Open Season in South Africa, murder, rape, stealing, corruption and whatever else evil you can think off. The rainbow has been in the repair shop for more than 15 years now, no one to fix it.

News24. Johannesburg, South Africa – The money stolen from the FNB Stadium after the Justin Bieber concert was not proceeds from ticket sales as reported by certain media, Big Concerts International confirmed in a press release on Wednesday.
According to Big Concerts, the estimated R3m that was stolen from a safe situated at the FNB Stadium belonged to third-party concessionaires and were proceeds from the sale of food and beverage from Bon Jovi’s show on Saturday night and Justin Bieber’s merchandise on Sunday night. The Justin Bieber concert was sold out six months in advance and no tickets were sold at the venue, Big Concerts reiterated.The concessions proceeds were being held in a safe ready for collection by a cash in transit company on Monday morning and police and investigators have since confirmed that the heist was a highly sophisticated planned theft.

Big Concerts also said that Justin Bieber and public safety were never at any risk as the heist took place in the early hours between 03:00 and 07:00 the morning after the concert and hours after Justin Bieber had departed South Africa. Big Concerts’ chief executive Justin van Wyk  told the Cape Argus on Wednesday that heist had deeply “rattled” the company. “I’m even concerned about our personal security. It’s freaked us out,” he said.
Van Wyk also said the heist had left them asking serious questions about security for major events such as the Bieber and Bon Jovi concerts, which were held on consecutive nights at the stadium.
“You bring out these huge stars, and the next day someone’s cleaned you out – literally,” he said. “The security industry is overrun by people who cannot necessarily be trusted.”

Police and security said they believe the heist to be an inside job and that the robbers had been working at chiseling through the wall over “a couple of days”. “I can’t see this as an external operation,” said Stadium Management CEO Jacques Grobbelaar. “Even I’m not entirely sure of where the strongroom in which the money was stored is. It was chosen because it is out of eyeshot,” he added. He said on the day of the heist there were 4 000 staff at the stadium. Of these 993 were security personnel.Stadium security are considering offering a reward for information that will lead to the arrest of the thieves.

WHISNews21: The world is finally seeing the ‘True Colors” of the South African dream that was portrayed by the world media for so long as a miracle. For the people visiting South Africa the only miracle they will experience is if they were not robbed, raped or killed in this Magical Wonderland.

Who will be next ?

Uncategorized Comments Off on Over R3 Million stolen at FNB Stadium after Concerts Print this News
Marty Martel Evening Prayer Line Wednesday May 16 (Newer)
(Older) Can It Be That the American Election Was Rigged?