Can It Be That the American Election Was Rigged? 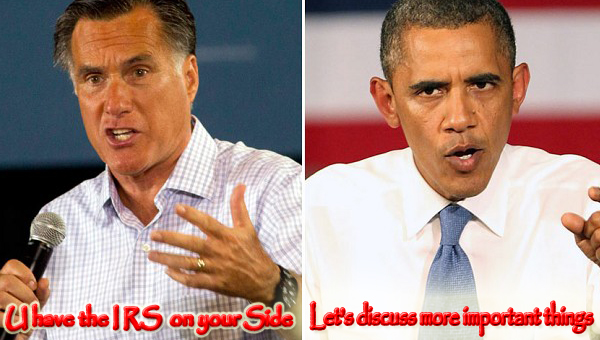 Can It Be That the American Election Was Rigged?

I am no expert at knowing if an election is rigged or not or even how to rig an election. However when a candidate like Obama wins with a small majority, and some will argue that it was not so small, then any help he can get from the IRS or covering up the Al-Qaeda threat and whatever else we don’t know about yet, will undoubtably make sure that, come election day the odds will be stacked in favour of the one of the two candidates, and in this case in Obama’s favour, as he had an unfair advantage over Romney, he had the IRS on his side targeting Romney supporters.

The IRS concentrated a campaign against Romney supporters, not against Obama supporters, my questions is why would they do that without good reason or orders from above. The president seems so upset about all this but does not mention that he gained perhaps at the very least thousands of votes because of this one way or another, and that him being elected free and fair was now clearly not the case.

Then all the facts that have now come to light about the Benghazi affair also shows that the President was not telling all about the attack. Sorry I mean the 2012, 9/11 terrorist attack in which 4 Americans were killed, while Hilary Clinton Obama’s right hand Woman cleary told us in no uncertain terms, “What does it matter at this stage”.

Well I agree with her as Obama is now President, what does it matter anymore, the presidency was won by denying the truth. No one seems to care about the friends and family of the 4 Americans that died because they were just doing their job for ordinary Americans and for their President, Obama. It’s just such a pity that the very person they were working for denied them any help when they needed it and were either too busy with more important things or just did not care about saving them, which they cleary could have, if they wanted too.

I have no doubt that the liberal press will cover up for Obama and all this will go away, as good people usually just go about their business and forget about the bad things that people do around us, but Liberals people will seek and destroy, so the Obamanation will save him from all this.

I am a simple man and only wish peace for all on this planet but to me it looks like the last election in America was by no means a free and fair election, but then that’s only my opinion and nobody needs to worry about what I say, as I am of no importance.

The OBAMANATION rules so WHAT DOES IT MATTER ANYMORE AT THIS STAGE.

Uncategorized Comments Off on Can It Be That the American Election Was Rigged? Print this News
Over R3 Million stolen at FNB Stadium after Concerts (Newer)
(Older) Over $100,000 Stolen From Justin Bieber & Bon Jovi