Jack,Bobby and Kenny Headin For Hall Of Fame 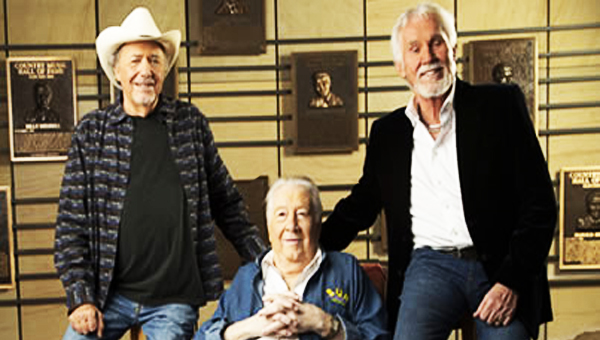 Kenny, who’s currently in the studio working on new music posted a video thanking his fans just moments after he got the call from Steve Moore, CMA Chief Executive Officer:

“The highest musical honor achievable for a Country Music artist or industry leader is to be inducted into the Country Music Hall of Fame, and these are all outstanding and highly deserving individuals,” said Steve Moore. “’Cowboy’ has been responsible for producing many of the iconic songs in Country Music. Bobby pioneered the Country concept album and was one of the first artists to take the format to Europe. And Kenny’s crossover success throughout a lengthy career introduced Country Music to a much wider audience.”

“This is big – an honor and the validation of a dream, totally unexpected,” said Bare. “Now I’ll be famous forever. Thanks to all of my supporters and thank you CMA.”

“I’ve been chosen for the Country Music Hall of Fame? I thought I was already in the Hall of Fame,” said Clement. “I could have gotten in there any time I wanted. Kyle [Young] gave me a key.”

“When I was young, my dad said, ‘Son, you have to think big to accomplish small’ and the Country Music Hall of Fame was as big as it gets,” said Rogers. “He wanted that for me. So every record I’ve ever made, every concert I’ve performed, and every song I’ve written was done for the single purpose of achieving that goal.

“I’m sure you can imagine how special it is and how exciting it was when Steve Moore called me with the news of my acceptance,” Kenny added. “It’s not the end of my journey, but it is certainly the high point, no matter what else I accomplish. From the bottom of my heart, I want to thank all the members who voted for me and all the friends who encouraged and believed in me, and my dad, for his vision of success.”

Induction ceremonies for Bare, Clement, and Rogers will take place at the Country Music Hall of Fame and Museum in the new CMA Theater later this year. Since 2007, the Museum’s Medallion Ceremony, an annual reunion of the Hall of Fame membership, has served as the official rite of induction for new members.

“The announcement of new Hall of Fame members is always a cause for celebration,” said Kyle Young, Director of the Country Music Hall of Fame and Museum. “I find it remarkable that all three 2013 honorees were born in the 1930s during the worldwide Great Depression and commercial Country Music’s formative years. They were present for the birth of rock ‘n’ roll, the ’60s folk revival, the ascent of hard Country, and the rise of sophisticated pop Country with a global impact. Cowboy Jack, Bobby, and Kenny are unique personalities whose contributions to the canon of American popular music are inerasable.”

CMA created the Country Music Hall of Fame in 1961 to recognize noteworthy individuals for their outstanding contributions to the format with Country Music’s highest honor.