Two Human Skelton’s One Lives And One Dies 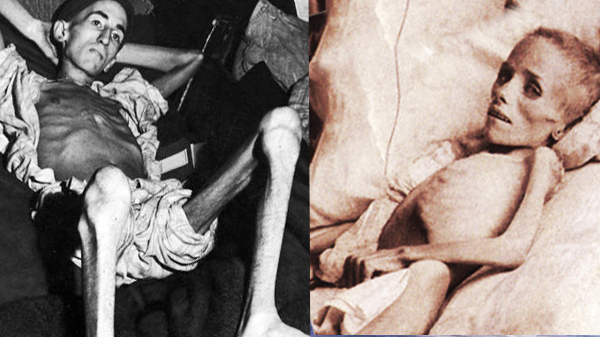 Today One Lives and the Other Not

Joe Demler The Human Skeleton Survives: On this Veterans Day, one of the most moving stories told on the recent November Honor Flight was that of a soldier from Port Washington who was known as “The Human Skeleton,” Private First Class Joe Demler. Before the trip, each veteran and guardian was given an Honor Flight jacket. The duds feature the group’s slogan, “Every Day is a Bonus,” across the back. That slogan comes from a man who should know: Demler. “I was in the 35th Division,” said Demler. “I was an infantry man in the Battle of the Bulge.” “He was in a farmhouse there and a tanker came through the side of that farmhouse, launched a shell and Joe all the way up to the second floor,” said Stars and Stripes Honor Flight President Joe Dean. Demler was crammed into a train car with men piled on top of men so deep they could not lie down. “We were stacked like cord wood. For four days, we stood in this rail car without food or water or bathroom facilities,” explained Demler. “The guy next to me died.” It hauled the group to a German prisoner-of-war camp. “When they rescued Joe, he said, ‘I learned two things. One is that I learned how to pray in a Nazi prison camp, and from now on, every day is a bonus. We’ve taken that slogan and put it on the back of our jackets and shirts,” said Dean. After the war, he went back to live in Port Washington.

Lizzie van Zyl died in a British Concentrations Camps due to the cruelness of The British during The Anglo Boer War less than 50 years before Joe Demler survived the German Concentration Camps: Experts have emphasized that the main reasons for the deaths were malnutrition and lack of food, exposure, polluted food and water, a dearth of soap and other cleaning aids, open furrow toilets and the bucket system, the serious over population of the camps, immunity deficiency, little or no fuel to boil water or do cooking, the denial of the disaster by the British is common knowledge.In the 2001 documentary Scorched Earth “it was indicated that the women and children were civilians against whom war was literally conducted. Their farms (more than 30 000) and furniture were burnt down, food and livestock were destroyed, they were molested and raped, and they were violently herded into the camps.

Up to 18 people were divided into a single bell-shaped tent – mostly old, worn-down army tents giving no protection against the scorching Karoo sun, rain and wind storms, bouts of hail and snow. Diseases like pneumonia were widespread due to exposure to the elements, which was worsened by malnutrition and deficient medication. The toilet facilities were one bucket for every 300 people. In one camp there were only 28 bucket toilets for 4 600 inmates. The toilet holes of many camps were 1 km from the tents. “Most people suffered from diarrhea, due to the polluted water and bad meat. Water was limited to one bucket per family per day, in other cases to one small kettle of water per day – not even a cup of water per person per day. “There was mostly no water for washing, either their bodies or clothes and bed linen. The elderly and children who fell into the toilet furrows could not be properly washed afterwards. To make things even worse families of burghers in the field were placed on half rations, a diabolical plan to slowly but surely exterminate these inmates. That was one of the notorious Methods of Barbarism to which historian S.B. Spies refers in his book. There were approximately 235 000 camp inmates and 240 000 soldiers that had to be fed by the British army. The deficient infrastructure made a disaster inevitable.” This young girl did not survive the concentration camps, is it not ironical that the British were the ones who showed the Germans by example that Concentration Camps are the way to go, if you want to exterminate a nation. Is it also fair that the Germans did not get away with the Extermination of the Jews yet the British got away with the extermination of the Boer woman and children.

As sorry as we are that Lizzie van Zyl died at the hands of the British, we are just as happy for Joe Demler and his family that he survived at the hands of the Germans. War is terrible and no one in their right mind wishes for war, but it is just as unfair that some people get away with human extermination while others have to suffer for generations for the same crimes. The crime is the same