South Africa Is On The Brink Of An Economic War 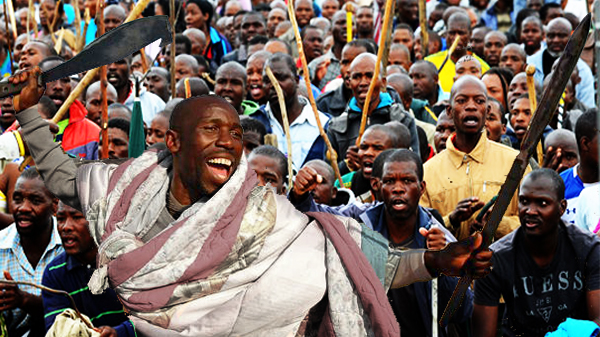 South Africa is on the brink of an “economic war” that threatens its security .

As violent protests spiral out of control, researchers, intelligence specialists and security organisations warn of impending national danger and more casualties.
Researcher Michael Hough, of the University of Pretoria’s Institute for Strategic Studies, said the country was in an economic war. “We should be gravely concerned. Economic warfare underlies a vast amount of political conflict. General strikes are known factors for revolutionary ideas and precipitate the final stages of revolutions. They are the cause of economic collapse, which, if infused with politics, as is happening, becomes an uncontrollable revolutionary force”.
He said that though a wage strike could be resolved, it was virtually impossible to resolve politicised mass action disputes “which are becoming more violent. What we are seeing now is becoming worse. People will die. With the country barely able to support the 15million people on welfare there is growing dissent, especially among the unemployed.”


Hough said leadership changes would not help.
“The problem is bigger than leaders. It requires stringent good governance to address the crisis of poor skills development and corruption – driving factors in a revolution.”
According to intelligence sources, the strikes are part of a systematic attack on the economy and there are fears that they will spread to other crucial construction sites.
The Medupi engineer said the targeting of the cranes was deliberate.
“This is orchestrated. It is industrial sabotage linked to current strike action in the rest of the country.”
SA Security Forces Union president Bheki Mvovo said information from the union’s members – several of whom were in military intelligence – showed that Malema was ready to sponsor an Arab Spring-style uprising.
“He has targets: the military, intelligence agencies, police, metro police, universities, construction and mines. It is an attempt to destabilise the country. South Africais facing a real danger,” Mvovo said.
Source:

SA Genocide Watch Comments Off on South Africa Is On The Brink Of An Economic War Print this News
Petes Weekly: They Are Hacking Watch Your Back (Newer)
(Older) The Compact Disc Turns 30 Years Old, Happy, Happy