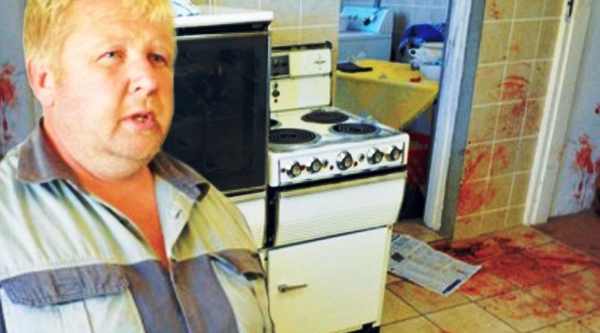 Bloemfontein – The small town of Trompsburg in the Free State

has been shocked by the brutal murders of a farmer and his wife. Slaughtered


Well-known and popular members of the community, Johan Fourie, 71, and his wife Cecile 72, were allegedly chopped to death with a chopper, on their farm on Sunday.
Detectives at the scene said it was one of the most gruesome murder scenes they have ever seen , reported Volksblad Newspaper.
The elderly couple’s blood was all over their farm-house, on the carpets, tiles, wall’s, doors and floors. The couple were last seen when they were having lunch at their son’s house in town.
Their bodies were found in the bedroom shortly before 20:00. Both had also been shot. The gun safe had been broken open.
An unnamed source said there was a trail of blood in the house, leading from the living room to the bedroom. A police spokesperson said the attackers appeared to have been waiting for the couple after gaining entry through a bathroom window. In the lounge of the farm-house there were bottles of liquor that the murderers were drinking while waiting for the couple to return home all this while they were at the morning service of the local Church.
“They were very friendly people who wouldn’t have harmed a fly. The whole town is shocked,” said a Trompsburg resident.
.

As with all the thousands of farm murders in South Africa which is now escalating at an alarming rate the Police were as usual investigating the murder. Only a revolver was taken at the murder scene which once again proves that it could only be described as a hate crime against the white farming community of South Africa.
In most farm murders in South Africa the farmers are brutally murdered with little or nothing stolen at the murder scene. The South African ANC government’s only comment is that these crimes are committed by petty thieves and very little or nothing is done to put a stop to these crimes against humanity, in fact they are encouraged by the the leaders singing the “Kill The Boer Kill The Farmer” song.
Nothing like this has ever taken place in South Africa against any population group since the British invaded South Africa during the Anglo Boer War. During this war about 25000  children and 6000 woman were put in concentration camps and died of starvation, sickness and rape under the cruel and inhuman treatment of the British troops.
If this genocide of the South African Boer farmers are kept up the figures will soon exceed the deaths of the Anglo Boer War. What makes these crimes of hate even worse is that the world seems to somehow think the Boer people deserve to die in such terrible and horrific ways, and they then turn a blind eye to the genocide. Fortunately the truth is slowly starting to surface and the world is starting to take note of these crimes against humanity. South African White farmers have recently been put on the Genocide Watch in the Hague. How many will still die no one can tell, but many will. As this article is being written news of another attack has been received, another elderly couple from Morningside Johannesburg.

Once all the South African farmers are murdered the food will run out and people will starve, that will be the result of the Genocide.

No Comments to Slaughtered Like Sheep In Free State Farmer's Home