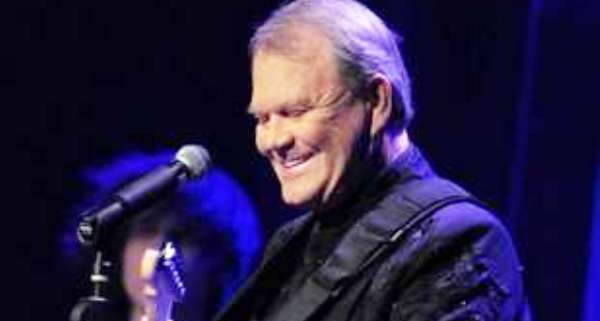 (Nashville, TN) I was fortunate to be able to attend Glen Campbell’s concert at the Ryman this past Tuesday night. I sat down in that old hard church pew at the Mother Church of Country Music, knowing in my heart and mind that what I was about to see and hear was one of the great legends in the music industry. I was not disappointed with the outcome of the show, from the beginning with “Instant People” opening, I could not sit still waiting for Glen to come on stage. Glen’s children have been taught well by their Father, because they are great musicians, and their harmony is as the old adage always says, family harmony is the greatest harmony that any group can have, and these young people gave a great account of what they were taught from their Dad.

From Glen’s opening entrance on stage to a standing ovation, to his first guitar lick, and his first vocals, I was immersed in what I considered one of the great entertainers of our time, not just country, but all of his music. His reverence for being at the Ryman made the evening even more important then what it already was. When I left the building, I realized that not once did I realize this man has a serious health issue, because he was truly magnificent. I heard someone say, he missed a couple guitar rides, and I thought to myself, it takes an idiot to say something like that, when we were witnessing the last time we might be privileged to see this man giving a live performance and making it one of best shows that I have been able to see in my many years in this business, and I have seen them all…..

Glen was on top of his show with great vocals, a set list of super hit standard songs, his camaraderie with his children in the band, his acknowledgment of the building he was performing in, his friends in attendance, and the passion he gave of this special performance for all of us. As you read Dave Paulson’s article, you will see that there were many artists and music industry people in attendance. I feel that he gave them everything they came to see and hear, and much more. Through his set which lasted over an hour, he was given several standing ovation. He was funny, serious, sad, happy, and full of energy, which has a lot to do with being on the stage of the Ryman. From one guitar to another, no waste of time, all was in order on the stage set for Glen Campbell, and when he had completed his show, you could feel the vibes inside of the Ole Church, as she spread her smile throughout the building. We had just witnessed an awesome performance by a great entertainer, a stylist that will live on forever, and the music of a man that gave a passionate performance for his friends and fans one last time. And who knows if this was Glen’s last performance in Nashville, or for that matter, anywhere. I hope that after you read my comments and Dave Paulson’s article you will keep Glen in your thoughts and prayers.

I have always loved his music, sang his music, and last night I once again sat in awe listening to his music. I did not hear any bad chords or any bad vocals. I feel that I was very lucky to attend one of the milestones in the music industry. Glen Campbell was awesome at the Ryman on January 3, 2012 to a sold out audience.

No Comments to Ryman Comes Alive With Glen Campbell