Old Dominion Lets You In Behind The Cover Story 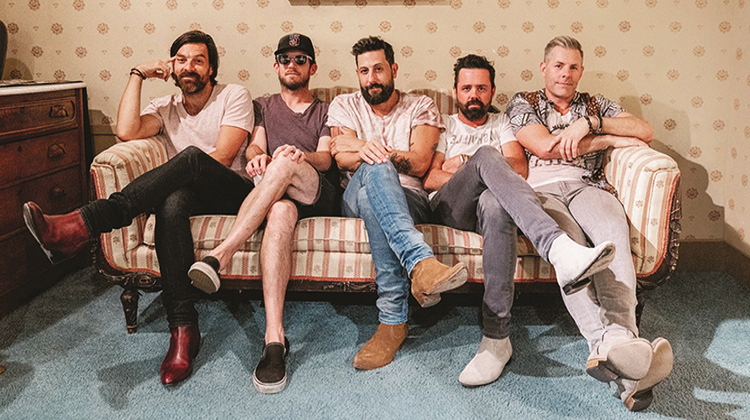 Old Dominion Lets You In Behind The Cover Story

t’s not exactly breaking news to suggest that Music Row isn’t a hotbed of casual spontaneity in terms of its day-to-day operations. Album releases are scheduled many months in advance, same with how studios are booked solid for the foreseeable future. Songwriter’s Gmail calendars are typically packed with carefully slotted co-writing sessions, with each morning and afternoon of a given week looking like an expert game of Tetris.

It’s not unheard of for the most major of record labels to painstakingly plot out the breaking of a new artist, which sometimes results in a new record being shelved for a certain length of time. It’s all about proper planning, checking market trends, protecting yourself against risk, optimizing any move you make for the highest reward.

Consisting of Matthew Ramsey, Trevor Rosen, Whit Sellers, Geoff Sprung and Brad Tursi, modern country pop band Old Dominion has seen all the methods and strategies a record label might employ since forming in 2007. As with any rule, however, there are exceptions. And with a couple of gold records and a handful of No.1 hit singles to its name, Old Dominion is a band that’s earned the right to absolutely be one of the proverbial hit-making exceptions to the often restrictively controlling record label rules.

For the five-piece band’s new self-titled RCA Nashville record, producer and longtime ally Shane McAnally was enlisted to helm the free-spirited sessions that resulted in a record that’s already spawned a couple of hits in “Make it Sweet,” the group’s most recent No.1, as well as the breezy, groove-intensive “One Man Band.” Aside from a few musical and lyrical bits and pieces here and there, what listeners experience on the new record was conceived and perfected in the studio by the band and its producer acting as craftsmen toiling away in a tool- and scrap-filled workshop.

Lead singer Matthew Ramsey found the sessions to be just what the group needed at this point in its existence. The picture he paints of free-flowing creative brainstorming is more or less the opposite of what many efficiency-focused, quick turnaround Nashville recording sessions are often like.

“It was very relaxed, and at times, very spontaneous,” the Virginia-native says over the phone, with a slightly mischievous chuckle growing more obvious. “There would be times when we’d be sitting in the control room and we would be like, ‘O.K. what are we going to do next?’”

For what it’s worth, from Ramsey’s perspective, his label bosses weren’t wringing their hands and fretting too terribly over the band’s carefree approach. Some might think such hands-off freedom is the result of a band winning autonomy after netting its corporate minders an office full of gold plaques and stockholder earnings, but Old Dominion hasn’t yet toiled under the overbearing eyes or watch-tapping fingers of any such executive overlords up to this juncture.

“Our record label has always been supportive of what we want to do,” he says. “They’ve never so much as poked their head into any session of ours. I do think they sensed our excitement about what we were doing and how we were doing it.”

The video for “One Man Band” complete with raw, behind-the-scenes footage of the group and their producer at work in the studio, might as well be a cinema verité fly-on-the-wall piece of documentary film-making. Mixed in with footage of the guys playing the song live on a concert stage, are clips of the band taking notes, referring to their phones and goofing around in the studio while the song developed from nebulous idea to a fully-formed work of art, ready for mass consumption.

In fact, the origin story of that song specifically offers another glimpse into the democratic conceptualization the band employs as often as possible.

“We usually look for the collective agreement when deciding how a song should end up,” Ramsey explains. “‘One Man Band’ was a song we had worked on a little before the studio. It had more of a reggae feel to it with more of a full-band thing. But one night before we played a show, Brad played something by himself in the dressing room and we all looked at each other, and just knew that was how the song would need to be once we got into the studio. The right path usually reveals itself to us in terms of what will work best.”

The best friends. The best people. Thank you @mattkjenkins @joshosbornesongwriter @shanemcanally and @trosen41 for continually taking time out of your busy schedules to help me raise money for those in need where I grew up. Your music and laughter reach further than you realize.

Of course, it’s safe to assume that even the most analytical, number-crunching, spreadsheet-reading bean counter would be put at ease by the presence of one of Nashville’s hottest producers joining a proven group of hitmaking musicians. As a producer for a recent string of critical and commercial successes from Kacey Musgraves, Sam Hunt, Midland, and of course, the previous two Old Dominion albums, 2015’s Meat and Candy, as well as 2017’s Happy Endings, McAnally has earned widespread praise and trust for his impeccable ear and unflinching honesty.

The Texas-native is also a hit songwriter and musician, so his ability to relate to artists and execs in equal measure is certainly a commodity in Music City as precious as platinum. But McAnally and the men of Old Dominion have a bond forged by something deeper than professional respect.

“The beauty of our relationship with Shane,” Ramsey says, “is that we’ve all known each other for so long. He’s been with us since before we had any success or before he had any real success. His instincts are so strong. He knows our ins and outs, and strengths and weaknesses, and he’s quick to point out both, which he can do because he’s our brother.”

There’s no getting around the fact that in today’s modern country landscape, cranking out albums and singles which millions people will click on and spend money on is vital to a band keeping control over their music. Old Dominion is compromised of musicians who are also songwriters, and just happen to have a keen sense of how to construct a song that sells. Although some starving artists might automatically connect a song’s commercial aspirations with its artistic merits–as in, the slicker the tune, the lower its true substance—Ramsey and his mates welcome the challenge that comes with crafting a “commercial song” that sells as much as it appeals to hearts and souls.

There’s a place for the bleeding-heart poet, the swaggering indie-minded rocker and the introspective coffeehouse balladeer. But for Old Dominion, its seat at the storytelling table is every bit as substantive, hard-earned and artistically challenging as anyone else’s. If intentions matter as much as the recorded output, and art is deeper than what simply shows up on the surface, then Old Dominion’s chosen medium is unquestionably valid. “In the beginning for us,” he explains, “it was very intentional for us to be a commercial band. We made no bones about it with our first album. We wanted to deliver an album full of radio hits and it served us well.”

He goes onto explain the value of understanding the system in which you’re working, as well as the importance of finding the right way to give people what they want while still saying what you want to as an artist. Ramsey says that now “the commercial side of things is so ingrained in us.” Because of that intrinsic nature, Old Dominion can now be themselves, while more coincidentally rather than purposefully, producing albums that sparkle.

“We like hooks and the sing-along element to the more commercial songs,” Ramsey adds. “It does take skill and hard work to speak to an audience about their lives and to have them feel something and for us to speak about our lives with a certain degree of vulnerability, while still packaging it nicely in a commercial song. That all takes a lot of work.”“When you learn how to write songs in Nashville, there are some unwritten rules, for lack of a better term, on how to create a song that’s commercially viable. You learn the rules and then you learn how to let go of them and push them a little bit. But ultimately, the more commercial songs are what we’re drawn to and what speaks to us creatively.

With another album sure to be a hit, thanks to songs that are surely to blow the roof off any room the group performs in, regardless of how massive they may be, Old Dominion’s goals are likely to remain as simple moving forward as they were when it came time to make this infectious, pleasing new album.

“It was special because there really wasn’t any hard plan when we went in,” Ramsey says. “We just went in to make music together, which is really all we ever want to do.”