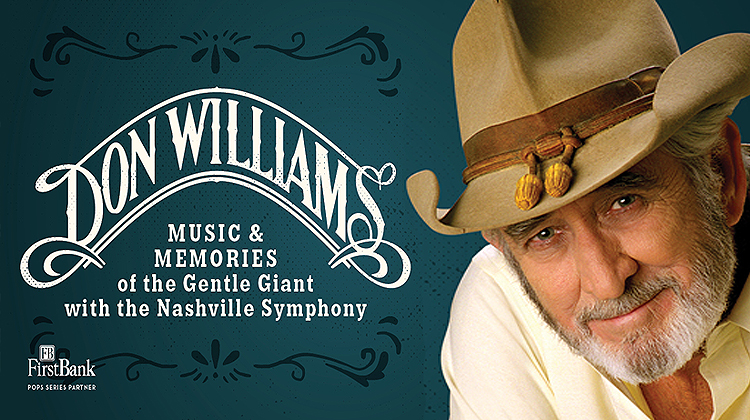 NASHVILLE, Tenn. – Spanning nearly 50 years, the music of Don Williams continues to connect adoring fans around the world, reminding them of simpler times and traditional country music. Now in 2019, Don celebrates two remarkable milestones; first being the 45th anniversary of Don’s first #1 hit “I Wouldn’t Want To Live If You Didn’t Love Me” and secondly being the first country artist to tour post-death as his touring band will be performing live with Don’s vocal and presence appearing via special technology.

“It has taken us over a year to get this show together,” says Don’s longtime manager Robert Pratt. “Fans will experience something that is truly remarkable as they will see performance footage of Don that has rarely been seen and all of Don’s vocals were taken from live recordings as they were performed around the world. In addition, I am honored that Keith Urban is serving as the shows curator.”

In total, Don Williams’ illustrious career generated a total of 17 #1 Hits and 38 Top 5 Hits on Billboard’s Hot Country Charts.  2019 also marks the 40th anniversary of his #1 hits “It Must Be Love” and “Love Me All Over Again.” He was inducted into the Country Music Hall of Fame in 2010, and was best known for his straightforward, yet smooth bass-baritone voice and soft tones which earned him the nickname The Gentle Giant of Country Music.

Don Williams: Music & Memories of The Gentle Giant takes its residency at Nashville’s famed Schermerhorn Symphony Center for three nights starting October 31 and will reflect on the Country Music Hall of Fame members music, accompanied by the Nashville Symphony.

Williams – (1939-2017) – was one of the earliest Country artists to take their music globally. In addition to his North American success, The Gentle Giant toured extensively throughout Europe and Africa and his legendary songs reached all corners of the globe and continue to capture the hearts of fans worldwide. His catalog is among the most streamed music from his era.

Williams first came to prominence in the 1960s as a member of the folk group The Pozo-Seco Singers. The trio recorded several hit records, with the biggest being “Time.” By 1971, Williams had gone solo, and had signed a publishing deal with Jack Clement. The Hall of Fame producer was so taken with Don’s style that he offered him a recording contract with his JMI Records in 1972. Early hits included “Atta Way To Go” and “Come Early Morning,” as well as “We Should Be Together,” which became his first Billboard top ten hit from 1974. He then moved to ABC / Dot (Later MCA), where the hits increased. Tracks such as “Rake and Ramblin’ Man,” “Tulsa Time,” and “Nobody But You” helped to make him one of the most-played artists on Country Radio in the 1970s and 1980s. He took home the Male Vocalist of the Year trophy from the Country Music Association in 1978, and notched his biggest hit in 1981 with “I Believe In You,” which also crossed over to the top-30 on the Hot 100.

Subsequent moves to Capitol Nashville and RCA kept Williams o n the charts into the 1990s, as he continued to play for huge crowds on the road. His success in the United States is well. Tickets for these shows are on sale via Ticketmaster and are also currently available with Nashville Symphony season ticket packages at NashvilleSymphony.org, 615-687-6400 or the Schermerhorn Symphony Center box office. 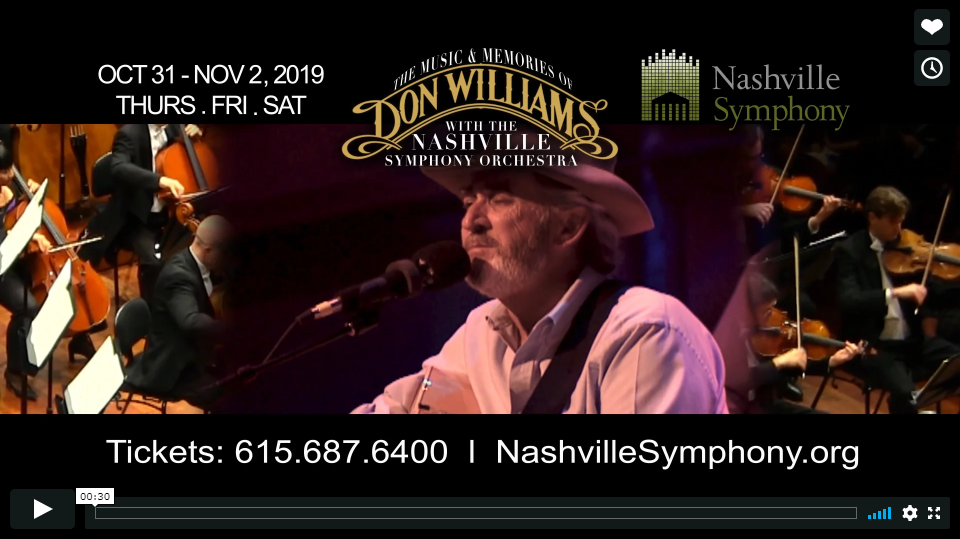 Uncategorized Comments Off on Don Williams: Music Of The Gentle Giant  Print this News
Old Dominion Lets You In Behind The Cover Story (Newer)
(Older) Jack Blanchard’s Column: We Named Him Donn