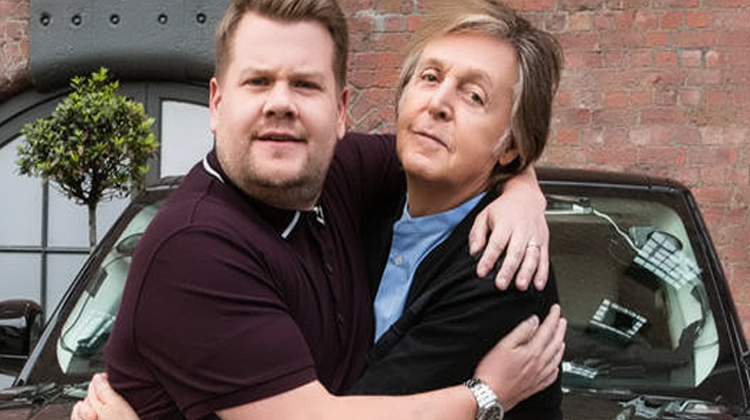 Is an Emotional Drive Down Memory—and Penny!—Lane

Nostalgia was certainly in the air as they came to St. Barnabas’ Church, where McCartney reminisced about his choir boy days. They also stopped by the barber shop mentioned in “Penny Lane” and mingled with excited fans along the sidewalks.

Back in the car, the legend recalled his late mother coming to him in a dream in the ’60s, in which she said “It’s going to be ok” and “Let it be.” “So, I wrote the song, ‘Let It Be,'” McCartney concluded. Cue the hit! In the midst of singing the classic together, Corden’s eyes began to well up. “I can remember my granddad who’s a musician and my dad sitting me down and saying, ‘We’re going to play you the best song that you’ve ever heard’ and I remember them playing me that,” the British star emotionally recalled. “If my granddad was here right now, he’d get an absolute kick out of this.” “He is,” McCartney sweetly assured him.

They soon came upon another familiar place—McCartney’s childhood home, where he lived from the time he was around 12 years old to roughly 20 years old. Having never been inside since he left, the two knocked on the door and were welcomed in with open arms. As if no time had passed, McCartney walked Corden through the house as he finishing “She Loves You” with John Lennon by the kitchen and how his dad wanted him to change the lyric “She loves you, yeah, yeah, yeah” to “She loves you, yes, yes, yes” in the name of proper English. Of course, we know they didn’t take that suggestion.

Behind the wheel again, Corden entertained McCartney by sporting several of The Beatles’ signature looks, though the musician had a suggestion. “If I was you, I’d just stick to polo shirts and jeans,” he quipped. As the grand finale, they headed inside a local pub where the band used to hang out and drink for an impromptu show for the patrons. It was an energetic and at times tearful pièce de résistance as McCartney as a band sang through hits like “A Hard Day’s Night,” “Ob-La-Di, Ob-La-Da” and “Love Me Do.””Ladies and gentlemen, I think this is an afternoon not one of us will ever forget,” Corden told the crowd. But, the show wasn’t over! For the final song, McCartney invited the late-night host up on stage for a duet of the unforgettable “Hey Jude.”

Karaoke Comments Off on James Corden’s Carpool Karaoke With Paul McCartney Print this News
Hollywood Is About As Godless As It Gets In America (Newer)
(Older) Story Behind The Song: Sugarland, ‘Bird In A Cage’