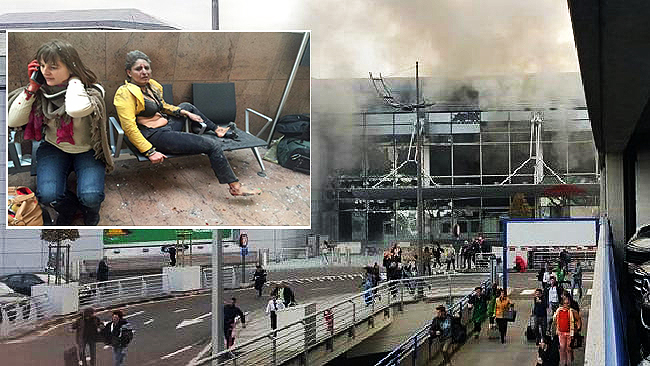 28 people are dead, while ten are critical and around 136 injured Following A firefighter told reporters that 28 people are dead and at least 136 people are injured. A Belgian news agency also reported that witnesses had said they heard gunshots and shouts of Arabic at the time of the explosions fuelling fears that this may have been an attack inspired by islamic State (ISIS) terrorists. Belgian media have said the airport explosions were a “suicide attack”.

An explosion has also taken place at Maelbeek metro station in Brussels centre near the European Union (EU) headquarters.  There are now fears of several coordinated attacks across the city and the entire metro system has been shut down.  The large explosions have taken out glass windows at the entrance and much of the airport’s ceiling has collapsed. Other explosive devices have been discovered at the airport, firefighters have told journalists at the scene.

The cause of the two blasts, which occurred at around 8am this morning at an American airline check-in desk, are unknown at this stage. There are unconformed reports that a bomb had been placed next to a check-in desk. Belgian Prime Minister Charles Michel has posted on Twitter: “We are following the situation minute by minute. The absolute priority is for the victims and people who were at the airport.” Flights have been cancelled It is unknown how many are injured Belgian authorities have closed the metro in the capital of Brussels following the explosions, according to Belgian newspaper Le Soir. The blasts occurred four days after the arrest in Brussels of Salah Abdeslam, suspected of being involved in November’s Paris massacre that left 130 people daed and more than 300 injured. TWITTER Reports are saying at least 20 people have been injured and several dead Abdeslam’s accomplice Najim Laacheaoui, who was in hiding with the Paris terrorist in the Brussels district of Molenbeek, is still on the run.  Belgian police had been on alert for any reprisal action. Social media showed pictures of smoke rising from the departure hall where all windows had been shattered by the blast. Passengers were seen running away down a slipway from the departure lounge.

Flights en-route to Brussels are expected to land at other European airports Rudi Vervoot, the president of the Brussels region, said: “There has been an explosion in the airport. An emergency plan will certainly be activated.” A witness said: “I was in the check-in queue and I heard an explosion. I saw smoke, I saw people panicking and running towards the exit. There was a second explosion much closer to me. “Everyone left the airport in panic, most people left their baggage.” Sources at the scene spoke of hearing two “very, very loud explosions”. He said: “I could feel the building move. There was also dust and smoke as well…I went towards where the explosion came from and there were people coming out looking very dazed and shocked. “The thinking here is that it is some kind of terrorist attack – that hasn’t been verified by any of the authorities here at the airport.” Witnesses have described feeling the ground rock and seeing dust coming from the ceiling.

Brussels Airport has confirmed on Twitter that two explosions have taken place and have asked people not to come to the airport. TWITTER The explosions have taken out the glass windows and the ceiling has collapsed The airport is being evacuated by police and is now on lockdown. Belgian media said rail traffic to the airport has also been suspended. Train services to the airport have been cancelled.  All flights are being diverted from the Brussels airport.  Airport security are asking passengers to leave their luggage at the scene.

Abdeslam was captured by Belgian commandos on Friday after spending four months as one of the world’s most wanted men. Abdesalam played a key role in organising the Paris November 13 attacks in which 130 people were massacred, but he lost his nerve when it came to detonating his suicide belt – instead dumping it in a bin and making a run for it.

Belgian Foreign Minister Didier Reynders revealed police discovered Abdesalam was intent on rebuilding a terror network of his own. Speaking at the German Marshall Fund’s forum he said the terrorist was “ready to start something” in Brussels. He said: “We found a lot of weapons, heavy weapons in the first investigations, and we have seen a new network of people around him in Brussels.” Belgium have raised the terror level to its maximum for all airports in the region of Flanders.Belgian MP Georges Dallemagne had just dropped his wife off at the airport when she heard the “massive explosions” and the roof caved in. He said: “I dropped her off around 7.40am this morning, and she called me to say that there were explosions around 7.58am. “She ran away immediately, in a state of shock, towards the Sheraton Hotel. Then she returned to pick up her baggage, realising that the danger in this zone had passed. “It was then that she saw broken windows, victims leaving the airport, the elderly put on stretchers, and the emergency services arriving. She saw a part of the ceiling had collapsed. She said the two explosions were around the departure hall.” At least 28 people have been reported dead after two explosions went off at Brussels airport this morning, believed to be a suicide bomber, followed by another explosion on the Metro

TWITTER People were injured as they walked by Other witnesses said they “felt shockwaves passing through the building”. Prime Minister David Cameron said in a statement:

“I am shocked and concerned by the events in Brussels. “We will do everything we can to help.”

Pictures have also begun to emerge on social media apparently showing pictures of wounded people outside the Maalbeek station which is close to the European Union (EU) headquarters which is now in lockdown.

Evan Lamos was on the Metro at Arts-Loi heading towards Maelbeek when his train was stopped. He and other passengers were forced to walk along the tracks, through the smoke-filled tunnel.

He said: “On the Metro between Schuman and Maelbeek. We have just been stopped due to an “incident on the line”. Can hear soft thudding in distance. “We felt a blast of air and my ears popped shortly after leaving Schuman station. “The Metro stopped immediately.”