Here's Why Birds Fly In A 'V' Formation 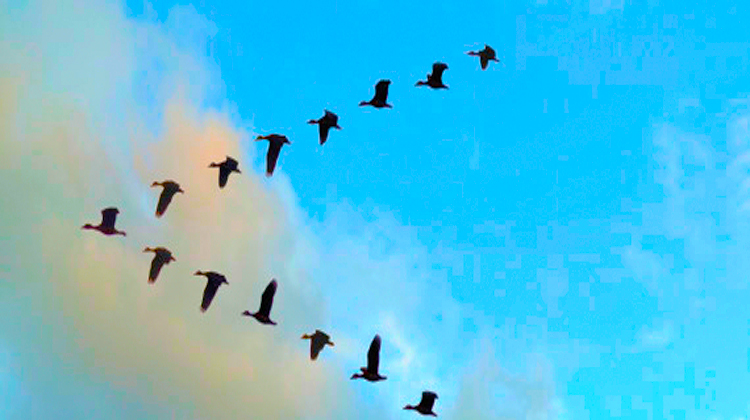 Here’s Why Birds Fly In A ‘V’ Formation

Anyone watching the autumn sky knows that migrating birds fly in a V formation, but scientists have long debated why. A new study of ibises finds that these big-winged birds carefully position their wingtips and sync their flapping, presumably to catch the preceding bird’s updraft—and save energy during flight.

There are two reasons birds might fly in a V formation: It may make flight easier, or they’re simply following the leader. Squadrons of planes can save fuel by flying in a V formation, and many scientists suspect that migrating birds do the same. Models that treated flapping birds like fixed-wing airplanes estimate that they save energy by drafting off each other, but currents created by airplanes are far more stable than the oscillating eddies coming off of a bird. “Air gets pretty darn wiggy behind a flapping wing,” says James Usherwood, a locomotor biomechanist at the Royal Veterinary College at the University of London in Hatfield, where the research took place.
The study, published online today in Nature, took advantage of an existing project to reintroduce endangered northern bald ibises (Geronticus eremita) to Europe. Scientists used a microlight plane to show hand-raised birds their ancestral migration route from Austria to Italy. A flock of 14 juveniles carried data loggers specially built by Usherwood and his lab. The device’s GPS determined each bird’s flight position to within 30 cm, and an accelerometer showed the timing of the wing flaps.


Just as aerodynamic estimates would predict, the birds positioned themselves to fly just behind and to the side of the bird in front, timing their wing beats to catch the uplifting eddies. When a bird flew directly behind another, the timing of the flapping reversed so that it could minimize the effects of the downdraft coming off the back of the bird’s body. “We didn’t think this was possible,” Usherwood says, considering that the feat requires careful flight and incredible awareness of one’s neighbors. “Perhaps these big V formation birds can be thought of quite like an airplane with wings that go up and down.”
The findings likely apply to other long-winged birds, such as pelicans, storks, and geese, Usherwood says. Smaller birds create more complex wakes that would make drafting too difficult. The researchers did not attempt to calculate the bird’s energy savings because the necessary physiological measurements would be too invasive for an endangered species. Previous studies estimate that birds can use 20% to 30% less energy while flying in a V.
“From a behavioral perspective it’s really a breakthrough,” says David Lentink, a mechanical engineer at Stanford University in Palo Alto, California, who was not involved in the work. “Showing that birds care about syncing their wing beats is definitely an important insight that we didn’t have before.” To definitively say that the birds are drafting off each other, however, the exact location of the eddies and the areas of downdraft would need to be measured on ibises, which would require flying them in a wind tunnel—a far more intrusive process than simply carrying a data logger.

Scientists do not know how the birds find that aerodynamic sweet spot, but they suspect that the animals align themselves either by sight or by sensing air currents through their feathers. Alternatively, they may move around until they find the location with the least resistance. In future studies, the researchers will switch to more common birds, such as pigeons or geese. They plan to investigate how the animals decide who sets the course and the pace, and whether a mistake made by the leader can ripple through the rest of the flock to cause traffic jams.
“It’s a pretty impressive piece of work as it is, but it does suggest that there’s a lot more to learn,” says Ty Hedrick, a biologist at the University of North Carolina, Chapel Hill, who studies flight aerodynamics in birds and insects. However they do it, he says, “birds are awfully good hang-glider pilots.”
This story has been provided by AAAS, the non-profit science society, and its international journal, Science.
Uncategorized Comments Off on Here's Why Birds Fly In A 'V' Formation Print this News
Marty's Prayer Line for Yesterday Today and Tomorrow (Newer)
(Older) Jim Rose Remembers Radio Dont Forget To Pass It On