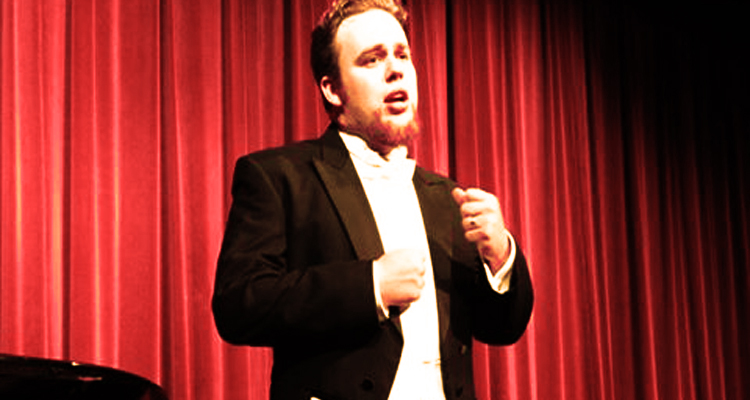 (Nashville, TN-11.25.13) Cumberland University located in Cookeville, TN unveiled an exciting new tenor voice to be reckoned with this past Thursday night, November 21, 2013 at the June and Bill Heydel Fine Arts Center Theatre.  Deron Ryan Martel mesmerized a crowd of family, friends, well-wishers, faculty members, and the general public to his voice recital.  The audience came aglow as soon as he sang his first note, and jolted everyone in their seats that they were about to listen to what will be one of the most successful tenor’s voices in his field of music.  Time and his age, his love this music, dedication, and commitment are attributes, he carries well.  His performance was delivered with the authority of a major tenor.

To say that he was in excellent voice would be an understatement. He had committed himself both in mind, heart, and vocally, to giving one of the most electrifying performances of his young career.  He was as we say in the entertainment world, at the “Top of his Game,” giving a one hour program with music from Danza, Danza Fanciulla Gentile to Una Furtive Lagrima from L. ‘Elisir D’Amore,  His vocal presentation of selected songs in French, Italian, and German were as if he spoke the languages fluently.
This night brought tears to many eyes with his performance of his16 song set.  He is the real deal, because of his love and passion for singing, which will move him forward to becoming a great successful super artist.  Even though our names are the same, he gave a performance that thrilled the large crowd assembled at the theatre to lend their support to his career.  The real proof of a great artist is when he performs in front of family, friends, and staff, with just his voice and his accompanist, and brings them to their feet for several standing ovations.
He has been supported by his family, friends, schoolmates, and most of all, his wife Brendan and her family, as she also is fully immersed in theatre with Deron.  She has been his lifeline to his music, by believing in him and letting him know that he can be the best of the best.  It is difficult not to be bias, but when his performance was so strong. I realized that Deron Ryan Martel is going to be successful because of his talent, his commitment, and his connection with his audience, and not to be left out, his faith. My many years on stage have taught me to know when talent is normal, good, very good, and in this case awesome.  What I heard throughout his performance was the beginning of a great success story for his future.  He will graduate from Cumberland University in May 2014 with a Bachelor’s Degree in Theatre.
Deron surprised the entire audience to complete his song selection with “Music of the Night,” a most compelling piece of music for any vocalist, and he gave a masterful performance of this masterpiece.  His performance would not have been as successful without his piano accompanist and friend, Lee Austin.  Both Deron and Lee were on the same page for every song the entire hour.
I am a proud father of this young man, but also a entertainment publicist, so writing this “longer than most” press release was difficult for me to do, but when I think of the extraordinary superb performance that he gave to all of us in attendance, this writing becomes easier.  Entertainment has many meanings, so when you see and hear a finished product, you realize that you have been a part of something special, and November 21, 2014 was a special evening.  Congratulations Deron Ryan Martel as you begin your successful journey in the world of music.
*Photos by Jackie Duke Irwin
For all media requests and personal appearances contact:
Marty Martel
Pres., MSP
Pres., BKD Promotions
Ph.(615) 822-6713
Fx.(615) 824-3830
http://www.bkdpromotions.com
Email:  martymartel@bestdamnshows.com