Animals Walked Back To Their Cells Laughing 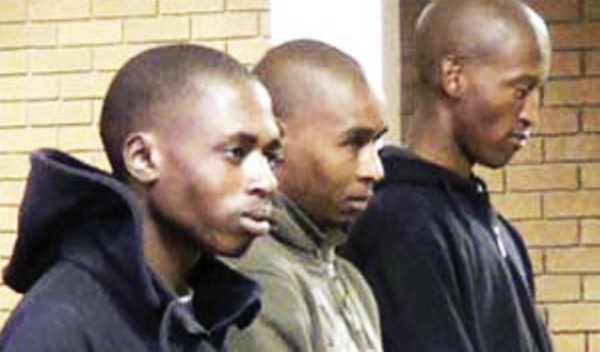 A 12-year-old white boy was drowned in a bath of boiling water by black robbers who raped his mother before killing both his parents in a violent house robbery.

Three black men broke into the family’s home in Walkerville, Johannesburg, where they assaulted and shot dead Tony Viana, 53, and brutally raped and killed his wife, Geraldine. They then tied up and gagged the sobbing boy, Amaro, and pushed him into a bath of boiling hot water to drown him, ‘because he would be able to identify them’.
The family’s gardener, Patrick Petrus Radebe, 24, their domestic servant’s son, Sipho Mbele, 21, pleaded guilty to three charges of murder and one charge of rape each, reported The Telegraph. David Motaung, 20, pleaded guilty on Tuesday to robbery charges.
According to the accused, “we mutually raped Geraldine Viana.” Sipho Mbele raped her first while Petrus Radebe helped to restrain her by standing on her face. Afterwards Radebe raped her too.
The family’s dog apparently barked tremendously during the burglary. The animal was killed by disembowelment.

They then left the South African court and walked back to their cells laughing, according to Beeld newspaper. As the death penalty was abolished in South Africa, they will probably get lengthy prison sentences but could be out on parole within five to ten years.

No Comments to Animals Walked Back To Their Cells Laughing