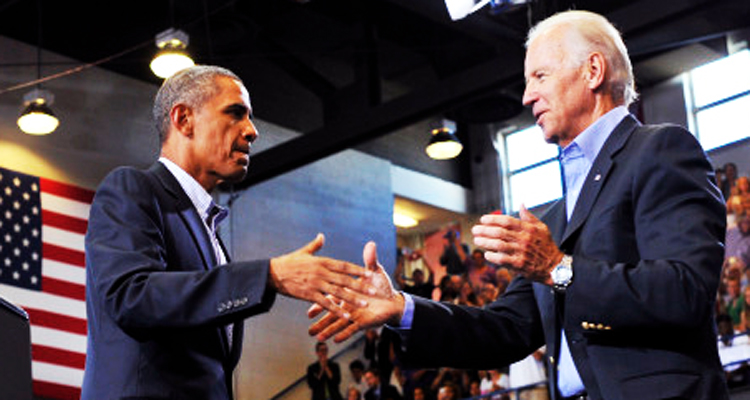 WASHINGTON — President Barack Obama on Thursday tried to lay to rest the suggestion that his administration considered replacing Vice President Joe Biden with former Secretary of State Hillary Clinton on his 2012 reelection ticket.
Obama said in an interview with MSNBC’s Chuck Todd he’s not always aware of his advisers’ polling and data-crunching — what with managing millions of federal employees — and any conversations about his reelection running mate occurred without his knowing.
“Here’s the one thing I can say for certain,” Obama said. “That, if they had asked me, I would have said there is no way that I’m not running again with Joe Biden. Because I genuinely believe that he has been one of the best vice presidents in our history. He also happens to be a friend. He also happens to be one of my most important advisers on domestic and foreign policy. I like him. When my back’s up against the wall, he has my back.”
Obama wrote off the Biden-replacement story as a side effect of Washington’s political “atmosphere.”
“Folks like to seem important by getting their version of events in the press — or books, or what have you,” he said.
Mark Halperin and John Heilemann, in their account of the 2012 election Double Down: Game Change 2012, write that top aides to Obama floated the idea of replacing Biden with Clinton. Obama’s then chief of staff, William Daley, confirmed the discussion to The New York Times.
“I was vocal about looking into a whole bunch of things, and this was one of them,” Daley said.
– Huffington Post

I seem to remember someone once saying, “I’ll blow your trumpet, and then you blow mine”, or was it “I’ll scratch your back and then you scratch mine” not sure oh well no matter, it’s not important.

There is more but it is all about the same, it seems as though even the Liberal Huffington Post who supports the President no matter what he does are getting on the wrong side of, in this case, their readers.