The 4th Of July Is Just Around The Corner 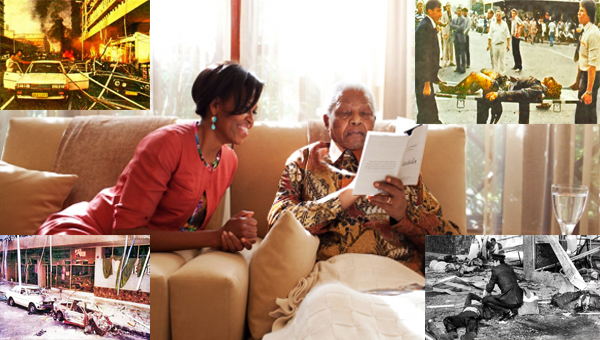 The 4th Of July Is Just Around The Corner, Obama Visits His Hero Mandela

With the 4th of July approaching the United States President is in Africa with his family friends and about 450 personal body guards, having the time of his life.

Americans should not be worried about how their money is being spent as Obama is promising South Africa millions of your American dollars, to use for some cause that will really be unexplainable to most Americans.

However it seems that collecting money from tax payers in America are good for handing out  to a South African government that has a proven record of being corrupt.

Well I suppose it is ok as long as the money is given to Africa and not to poor American’s who in my opinion need the help perhaps more, everything is ok in the “No Rules” world of 2013.

It is very noticeable that Obama has no interest in the murders of white people now approaching the 100,000 mark, as long as he can visit the people who have the power to stop these murders everything is ok for his royal family.

I am not sure if it’s true or not but there is a rumor that Obama has a food taster who tastes his food first before he eats it, in the event that if it is poisoned, his food taster will die. Well I would apply for that job as most people love Obama so who in the world will want to poison him.

And so the world turns……if you are in the circle your time will also come……when?……I don’t know…..

Have a great Sunday, if the Sun shines and you are safe and healthy, what more can we wish for ?

Uncategorized Comments Off on The 4th Of July Is Just Around The Corner Print this News
General: I’ll Never Stand In Line Again, True or False ? (Newer)
(Older) Rhon’s Sunday Inspiration From Jesus Calling