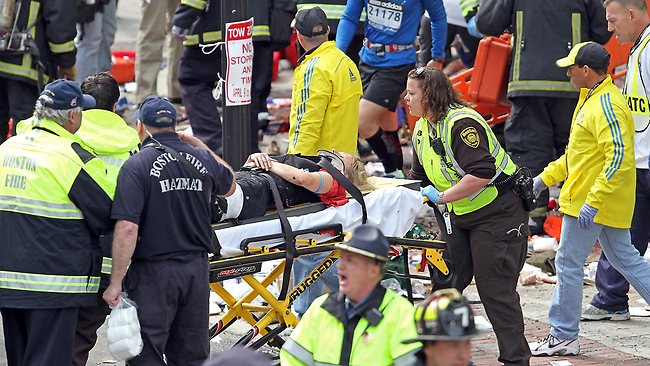 The victims of the Boston Marathon bombing have endured pain and injury but  they may be spared further insult in the form of huge medical bills, thanks to  Massachusetts’ unique health care system.

Owing to a 2006 health care reform law enacted by then-Gov. Mitt Romney (R),  just 4 percent of Massachusetts residents were uninsured in 2011,  according to census data. And many of those bombing victims who lack health  insurance, including those visiting Boston from out of state, may qualify for  financial assistance from a “Romneycare” safety-net program.

“When I was watching the events and hearing from my colleagues what was  happening at the hospitals I said, ‘Well, thank God we have near-universal  coverage in Massachusetts’ because those people almost certainly would be  covered,” said JudyAnn Bigby, who was secretary of the Massachusetts Executive  Office of Health and Human Services under Gov. Deval Patrick (D) from 2007 to  2012.

Boston’s emergency services and its hospitals have been praised for the speed  and effectiveness of the medical response to the bombing last Monday. More than 280 injured marathon participants and spectators  passed through the doors of Boston hospitals and clinics over the last week, but  none have died beyond the first three fatalities and just two victims remained in critical condition as of Monday.

But all that medical care costs money. Trauma care, surgery, hospital  services, recovery and rehabilitation charges can quickly mount. Compared to  other states with higher rates of uninsured people and weaker safety nets, the  Massachusetts health care system is built to minimize the likelihood that huge  debts will follow major injuries and illnesses.

Massachusetts enforces an individual mandate that nearly every state resident  obtain some form of health coverage, and it also provides subsidized coverage via Medicaid or private  health insurance to low- and middle-income people who don’t receive health  benefits at work. This system served as a model for President Barack Obama’s  health care reform law, known as the Affordable Care Act.

In addition to providing for health insurance coverage, Massachusetts runs a  program called Health Safety Net. This benefit allows patients who have no  health insurance or inadequate coverage to apply to have the state pay their  hospital bills, even if they aren’t residents, Bigby said. Generally, the only  people who qualify are those who make up to 400 percent of the federal poverty  level, which is $45,690 for a single person this year — but exceptions are made  for severe illness and injuries, according to Bigby. The Health Safety Net  benefit is largely financed by assessments on hospitals and health insurance  companies.

Federal law requires hospitals to accept and stabilize everyone in need of  emergency medical care regardless of their ability to pay. In Massachusetts,  however, broader insurance coverage and a safety net program for uninsured  people’s hospital bills not only alleviates some worry about high costs, but  also diminishes the chances a patient will be sent out of the hospital as soon  as they are out of mortal danger, Bigby said.

“In some of those places, people would be seen and stabilized and hospitals  would try to ship them somewhere else, to a public hospital or somewhere where  people without insurance generally are sent,” Bigby said.

Yet, given the extensive nature of some patients’ injuries, including lost  limbs, there will be ongoing medical and rehabilitative costs that may not be covered by health insurance or by the Massachusetts  safety net program. “The breadth of coverage could leave some people with  some uncovered expenses given the severity of some of the potential injuries,”  Bigby said. The Health Safety Net Program is limited to hospital costs.

Patients’ costs will vary, Bigby said, depending on the care they receive and  the level of coverage their health insurance plans provide. In  Massachusetts, some less expensive insurance requires patients to cover 20  percent of their hospital bills and pay deductibles as high as $5,000, she  said.

That’s one reason why some bombing victims are raising money online and why Gov.  Patrick and Boston Mayor Tom Menino (D) have backed the creation of the One Boston Fund. The fund will benefit those injured in the  blasts and the families of the three killed at the marathon site and the police officer killed in Cambridge Thursday. Massachusetts and the federal government also have crime victims’ compensation  funds available.

At Beth Israel Deaconess Medical Center in Boston, which treated victims as  well as the two bombing suspects, billing questions will wait until a later  date, spokesman Jerry Berger wrote in e-mails to The Huffington Post. “We just  aren’t focusing on that yet. It’s a question that will be addressed when  everyone is discharged,” Berger wrote. “We have been focusing on providing  care.”

The most severely injured bombing victims likely will suffer lifelong  health problems or disabilities as a result of their injuries, and Massachusetts  law guarantees residents of the state will remain insured, said Donald Berwick,  a former acting administrator of the U.S. Centers for Medicare and Medicaid  Services under Obama and a possible 2014 gubernatorial candidate in Massachusetts.

In other states, those would qualify as pre-existing conditions that would  enable health insurance companies to refuse future coverage for the victims, he  said. That will change when the health insurance market reforms under Obama’s health care  reform law are enforced next year, Berwick noted.

“Massachusetts is the only state, until the Affordable Care Act comes into  effect, in which they have to issue insurance,” he  said.

Uncategorized Comments Off on Romneycare Benefit’s Boston Bomb Victims, Ironic ? Print this News
Buck T Edwards Needs Your Picture For Video (Newer)
(Older) Is this A Joke Or Is It True, Please Comment.