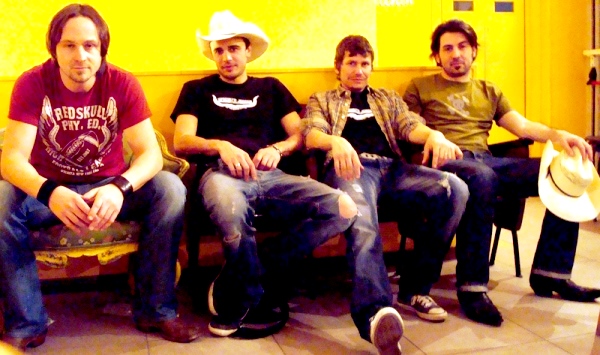 Modena, Italy, locals spent the month of January in the studio, finishing up the mastering on their new CD. Now it is being released to radio. The songs were written by Nashville songwriter, Lonnie Ratliff and music was written  by Dario Benazzi and Roberto Bonfatti, band members of Spaghetti Jensen.  Along with Alberto LaMonica and Paolo Chiossi., who make up the rest of the band. The band has been together since 2011 with these same members, and the guys say they are friends first then band members.

Like a lot of bands do, as they are starting out they played cover tunes as has Spaghetti, they began to play the most popular Country covers on the stages, first close to Modena then around Emilia and other Italian regions. The turning point of their career came about when Spaghetti decided to write and play their own songs in the shows and then record 7 tracks of fresh and cool Country music contaminated by rock, blues, funky and bluegrass, with a typical Italian flavor. “Fast Cars and and Guitars”. Watch for them in your area this summer.