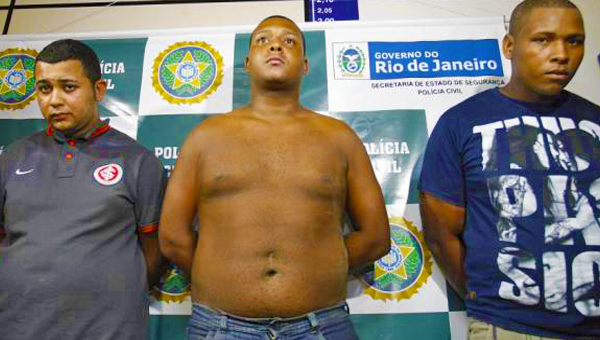 U.S. tourist in Brazil kidnapped, robbed and raped in front of boyfriend on bus during 6-hour nightmare: police

A late night outing turned into a six-hour-long nightmare after an American woman was gang raped and beaten aboard a public transit van while her handcuffed French boyfriend looked on helplessly, in an incident that’s shocked this resort city as it gears up to host next year’s World Cup and the 2016 Olympics.

The police response to the attack was swift: The three alleged perpetrators, aged 20 to 22, have all been taken into custody, and investigators are combing databases to determine whether the men might have been behind any other crimes.

Many still ask whether Rio authorities, who have succeeded in cracking down on much of the city’s drug violence, are up to the task of protecting the waves of tourists expected to flood the city during the upcoming double-header of mega-events. Some 2 million people are also expected to flock to the city in late July for World Youth Day, a Roman Catholic pilgrimage that Pope Francis is scheduled to attend.

Some observers said the attack came as a particular shock given that safety has improved at least in the city’s tourist-friendly, seaside South Zone neighborhoods. Foreigners and moneyed local residents who even three or four years ago would have hesitated to hail a taxi in the street or walk around after dark now do both without thinking twice.

“No one expects to be attacked in Disneyland, handcuffed and roughed up,” Globo newspaper quoted Alfredo Lopes, the head of an association representing Brazil’s hotel sector. “Copacabana is our Disneyland.”

Yet it was in that very beachfront neighborhood, full of senior citizens in bikinis by day but seedier by night, that the two foreigners hailed one of the fleet of public transit vans often used as a speedier alternative to buses. Police investigating the case say the two foreigners, both in their early-20s, were headed shortly after midnight Saturday to Lapa, a popular downtown nightlife hotspot where Rio’s youth converges on clubs, bars and samba venues.

But the pair never made it to their destination. A few minutes into their journey, the van operators forced the other passengers off and inflicted on the two foreigners what Alexandre Braga, the police officer leading the investigation, has called a “party of evil.”

The three assailants took turns raping the woman and beating the man, whom they handcuffed and sometimes struck with a metal crowbar, Braga told a news conference Tuesday.

The men split up the driving, ending up in Rio’s sister city of Niteroi across Guanabara Bay, where they went on a spending spree with the foreigners’ credit cards. Once they hit the limit on both cards, spending around $500 at gas stations and convenience stores, the suspects drove the pair back to Rio, where the foreigners were staying, and forced the woman to fetch another credit card, Braga said.

Although she was alone, she didn’t call the police or alert anyone, Braga said, “because the young man was still under the suspects’ control and she feared something even worse might happen to him.”

Some six hours after they were kidnapped, the two were dumped by the side of a highway near the city of Itaborai, some 50 kilometers from Rio. They managed to make it to an unidentified country’s consulate, where officials took the two to the special police delegation that specializes in crimes against foreigners. The young woman has returned to the U.S., while the man remains in Rio to help with the investigations, Braga said.

Two of the suspects have confessed to Saturday’s attack, while the third denies any responsibility.

“They do not show any repentance,” Braga said. “They are quite indifferent, cold.”

He said the men appeared to work as legitimate van operators, with crime an occasional side venture. Though they apparently were authorized to transport passengers in Niteroi and neighboring Sao Goncalo, the suspects were not allowed to operate the van in Rio, he said.

The suspects allegedly had rented the van, which seats about a dozen people and has dark tinted windows, from the vehicle’s owner, who police say is not suspected of any involvement in the crime.

Rio’s van services are widely reviled for their precarious safety conditions and reckless driving, as well as their links to organized crime. Some vans are run by militias largely composed of former police and firemen who control large swaths of the city’s slums and run clandestine transportation and other services. In general, tourists avoid the vans and opt for regular buses or taxis.

Sexual assaults remain a problem on public transit. Last year, a woman was raped on a moving bus in broad daylight in a widely publicized case, and the Rio subway has special women-only cars to help prevent such attacks.

Still, Brazilian officials emphasized Rio is not particularly prone to such attacks.

“I think sexual violence is something that can happen anywhere,” said Aparecida Goncalves, Brazil’s national secretary for violence against women. “I don’t think that the city of Rio is more dangerous than others.”

“Now we have more ways of denouncing them,” she said, “of talking about and taking the necessary measures so those responsible are punished and imprisoned.”

Walter Maierovitch, Brazil’s former drug czar and an organized crime expert, said that with crime down overall, one of the city’s main challenges will be making sure visitors remain vigilant and aware of basic safety precautions.

“There has been a lot of improvement in Rio but there is still a lot more to be done in terms of security, mainly more preventive actions, alerting tourists both foreign and domestic of the precautions they should take, neighborhoods to avoid,” he said.

He added that Saturday’s attack “was a setback, but in terms of image and security I don’t think it is a major or long-lasting one that will scare tourists away from Rio.”

Australian visitors Emma Richardson and Jason Sestic said they have been taking extraordinary precautions throughout their weeklong stay in Rio.

“We’ve stayed well away from Copacabana and the beach areas at night because of `Lonely Planet,'” said Sestic, referring to the famous backpackers’ guidebook. The 35-year-old, who works in construction, added, “I’m a pretty paranoid person in general and I’ve heard enough stories about here to be really paranoid.”

Uncategorized Comments Off on Can It Be South Africa And Brazil Are Two Of A Kind Print this News
Wonderful Friendships Made: Sounds Of Distinction (Newer)
(Older) Rhon’s Sunday Inspiration From Jesus Calling