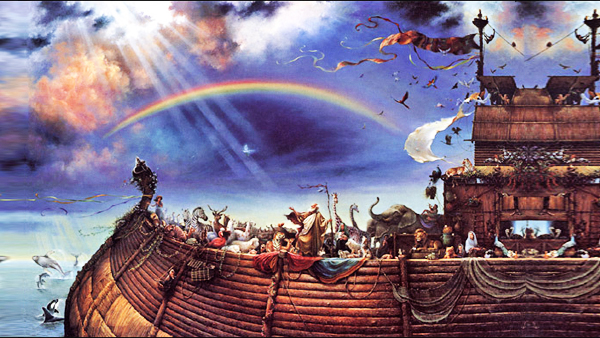 Robert Ballard, one of the world’s most famous underwater explorers, has set his sights on proving the existence of one of the Bible’s most well known stories.

In an interview with ABC’s Christiane Amanpour the archaeologist who discovered the Titanic discussed his findings from his search in Turkey for evidence of a civilization swept away by a monstrous ancient flood.

“We went in there to look for the flood,” Ballard said. “Not just a slow moving, advancing rise of sea level, but a really big flood that then stayed… The land that went under stayed under.”

Many have claimed to have discovered evidence of Noah’s Ark, the huge ship that Noah filled with two of each creature to repopulate the planet following God’s devastating flood. But in the 1990s, geologists William Ryan and Walter Pitman gathered compelling evidence that showed a flood–if not an ark–may have occurredin the Middle East region about 7,500 years ago, PBS reports.

The theory, the Guardian reports, is that a rising Mediterranean Sea pushed a channel through what is now the Bosphorus, submerging the original shoreline of the Black Sea in a deluge flowing at about 200 times the volume of Niagara Falls and extending out for 100,000 square miles.

Ballard has been exploring this theory for more than a decade, National Geographic reports, first discovering evidence of a submerged ancient shoreline in 1999. At that point, Ballard was still not convinced this was a biblical flood, according to the Guardian. Last year, his team found a vessel and one of its crew members in the Black Sea, according to ABC.

Ballard is using advanced robotic technology to travel back nearly 12,000 years to a time when much of the Earth was covered in ice, ABC reports. If and when this ice started to melt, massive floods may have surged through parts of the globe, wreaking havoc on anything and anyone in its way.

With an impressive track record (besides the Titanic, Ballard also found the wreck of the battleship, Bismarck, and a U.S. fleet lost off Guadalcanal in the Pacific) and plenty of confidence, Ballard remains unfazed by critics. He plans on returning to Turkey next summer.

The story of Noah and his ark is a building block of Genesis, in the Old Testament. It is similar in some respects to the Babylonian epic of Gilgamesh, according to National Geographic, and the ancient Greeks, Romans and Native Americans all have their own variations on legendary flood stories.