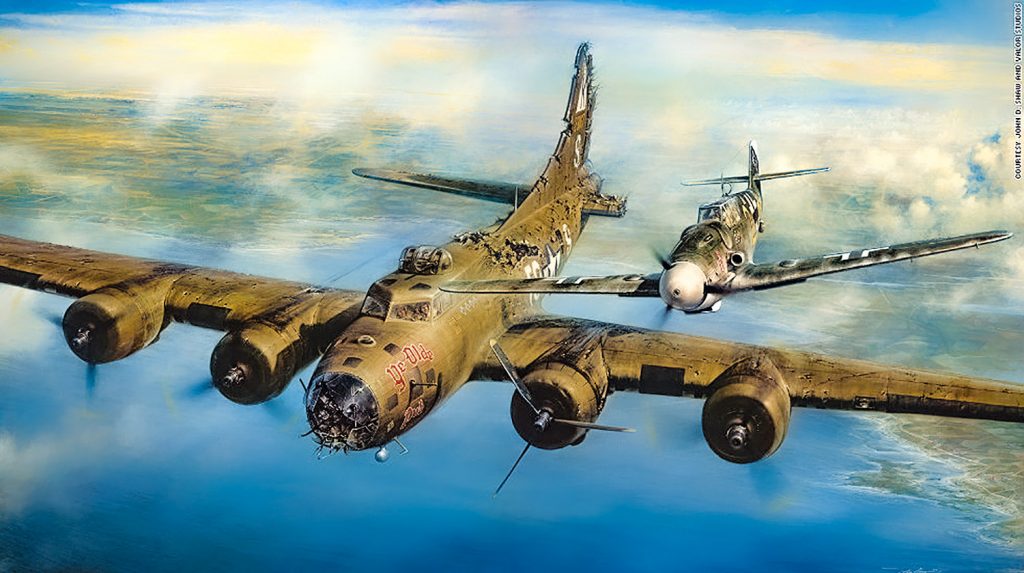 Does This True Story Give Us Hope That There Is Still Some Humanity Left in Some Of Us? 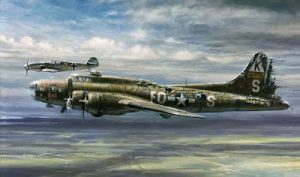 The 21-year old American B-17 pilot glanced outside his cockpit and froze. He blinked hard and looked again, hoping it was just a mirage. But his co-pilot stared at the same horrible vision. “My God, this is a nightmare,” the co-pilot said. “He’s going to destroy us,” the pilot
agreed.
The men were looking at a gray German Messerschmitt fighter hovering just three feet off their wingtip. It was five days before Christmas 1943, and the fighter had closed in on their crippled American B-17 bomber for the kill. 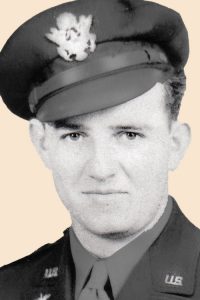 The B-17 pilot, Charles Brown, was a 21-year-old West Virginia farm boy on his first combat mission. His bomber had been shot to pieces by swarming fighters, and his plane was alone, struggling to stay in the skies above Germany . Half his crew was wounded, and the tail gunner was dead, his blood frozen in icicles over the machine guns.But when Brown and his co-pilot, Spencer “Pinky” Luke, looked at the fighter pilot again, something odd happened. The German didn’t pull the trigger. He stared back at the bomber in amazement and respect. Instead of pressing the attack, he nodded at Brown and saluted. What happened next was one of the most remarkable acts of chivalry recorded during World War II.

Charles Brown was on his first combat mission during World War II when he met an enemy unlike any other. Revenge, not honor, is what drove 2nd Lt. Franz Stigler to jump into his fighter that chilly December day in 1943. Stigler wasn’t just any fighter pilot. He was an ace. One more kill and he would win The Knight’s Cross, German’s highest award for valor.

Yet Stigler was driven by something deeper than glory. His older brother, August, was a fellow Luftwaffe pilot who had been killed earlier in the war. American pilots had killed Stigler’s comrades and were bombing his country’s cities. Stigler was standing near his fighter on a German airbase when he heard a bomber’s engine. Looking up, he saw a B-17 flying so low it looked like it was going to land. As the bomber disappeared behind some trees, Stigler tossed his cigarette aside, saluted a ground crewman and took off in pursuit. 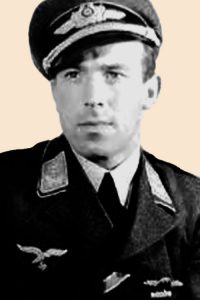 As Stigler’s fighter rose to meet the bomber, he decided to attack it from behind. He climbed behind the sputtering bomber, squinted into his gun sight and placed his hand on the trigger. He was about to fire when he hesitated. Stigler was baffled. No one in the bomber fired at him. He looked closer at the tail gunner. He was still, his white fleece collar soaked with blood. Stigler craned his neck to examine the rest of the bomber. Its skin had been peeled away by shells, its guns knocked out. One propeller wasn’t turning. Smoke trailed from another engine. He could see men huddled inside the shattered plane tending the wounds of other crewmen.Then he nudged his plane alongside the bomber’s wings and locked eyes with the pilot whose eyes were wide with shock and horror. Stigler pressed his hand over the rosary he kept in his flight jacket. He eased his index finger off the trigger. He couldn’t shoot. It would be murder.

Stigler wasn’t just motivated by vengeance that day. He also lived by a code. He could trace his family’s ancestry to knights in 16th century Europe . He had once studied to be a priest. A German pilot who spared the enemy, though, risked death in Nazi Germany. If someone reported him, he would be executed.
Yet Stigler could also hear the voice of his commanding officer, who once told him: “You follow the rules of war for you — not your enemy. You fight by rules to keep your humanity.” Alone with the crippled bomber, Stigler changed his mission. He nodded at the American pilot and began flying in formation so German anti-aircraft gunners on the ground wouldn’t shoot down the slow-moving bomber. (The Luftwaffe had B-17s of its own, shot down and rebuilt for secret missions and training.) Stigler escorted the bomber over the North Sea and took one last look at the American pilot. Then he saluted him, peeled his fighter away and returned to Germany. 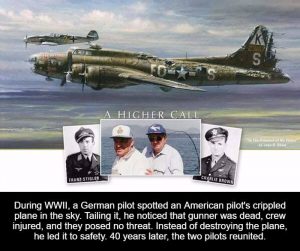 “Good luck,” Stigler said to himself. “You’re in God’s hands now…” Franz Stigler didn’t think the big B-17 could make it back to England and wondered for years what happened to the American pilot and crew he encountered in combat. As he watched the German fighter peel away that December day, 2nd Lt. Charles Brown wasn’t thinking of the philosophical
connection between enemies. He was thinking of survival. He flew his crippled plane, filled with wounded, back to his base in England and landed with one of four engines knocked out, one
failing and barely any fuel left. After his bomber came to a stop, he eaned back in his chair and put a hand over a pocket
Bible he kept in his flight jacket. Then he sat in silence.

Brown flew more missions before the war ended. Life moved on. He got married, had two daughters, supervised foreign aid for the U.S. State Department during the Vietnam War and eventually retired to Florida. Late in life, though, the encounter with the German pilot began to gnaw at him. He started having nightmares, but in his dream there would be no act of mercy. He would awaken just before his bomber crashed. Brown took on a new mission. He had to find that German pilot. Who was he? Why did he save my life? He scoured military archives in the U.S. and England . He attended a pilots’ reunion and shared his story. He finally placed an ad in a German newsletter for former Luftwaffe pilots, retelling the story and asking if anyone knew the pilot. On January 18, 1990, Brown received a letter. He opened it and read: “Dear Charles, All these years I wondered what happened to that B-17, did she make it home? Did her crew survive their wounds? To hear of your survival has filled me with indescribable joy…” 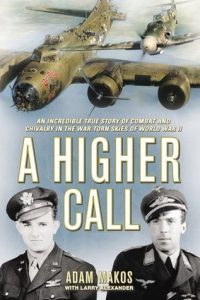 It was Stigler. He had left Germany after the war and moved to Vancouver, British Columbia, in 1953. He became a prosperous businessman. Now
retired, Stigler told Brown that he would be in Florida come summer and “it sure would be nice to talk about our encounter.” Brown was so excited, though, that he couldn’t wait to see Stigler. He called directory assistance for Vancouver and asked whether there was a number for a Franz Stigler. He dialed the number, and Stigler picked up. “My Goodness, it’s you!” Brown shouted as tears ran down his cheeks. Brown had to do more. He wrote a letter to Stigler in which he said: “To say THANK YOU, THANK YOU, THANK YOU on behalf of my surviving crewmembers and their families appears totally inadequate.” 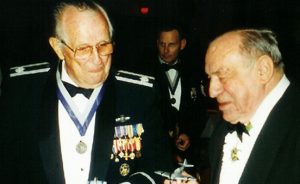 One of Brown’s friends was there to record the summer reunion. Both men looked like retired businessmen: they were plump, sporting neat ties and formal shirts. They fell into each other’ arms and wept and laughed. They talked about their encounter in a light, jovial tone. The mood then changed. Someone asked Stigler what he thought about Brown. Stigler sighed and his square jaw tightened. He began to fight back tears before he said in heavily accented English: “I love you, Charlie.”

Stigler had lost his brother, his friends and his country. He was virtually exiled by his countrymen after the war. There were 28,000 pilots who fought for the German air force. Only 1,200 survived. The war cost him everything. Charlie Brown was the only good thing that came out of World War II for Franz. It was the one thing he could be proud of. The meeting helped Brown as well, says his oldest daughter, Dawn Warner. Brown and Stigler became pals. 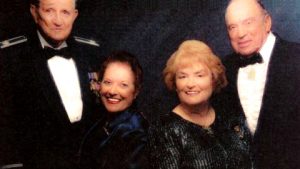 They would take fishing trips together. They would fly cross-country to each other homes and take road trips together to share their story at schools and veterans’ reunions. Their wives, Jackie Brown and Hiya Stigler, became friends. Brown’s daughter says her father would worry about Stigler’s health and constantly check in on him. “It wasn’t just for show,” she says. “They really did feel for each other. They talked about once a week.” As his friendship with Stigler deepened, something else happened to her father, Warner says “The nightmares went away.” Brown had written a letter of thanks to Stigler, but one day, he showed the extent of his gratitude. He organized a reunion of his surviving crew members, along with their extended families. He invited Stigler as a guest of honor. During the reunion, a video was played showing all the faces of the people that now lived — children, grandchildren, relatives — because of Stigler’s act of chivalry. Stigler watched the film from his seat of honor.
“Everybody was crying, not just him,” Warner says.

Stigler and Brown died within months of each other in 2008. Stigler was 92, and Brown was 87. They had started off as enemies, became friends, and then something more. After he died, Warner was searching through Brown’s library when she came across a book on German fighter jets. Stigler had giventhe book to Brown. Both were country boys who loved to read about planes. Warner opened the book and saw an inscription Stigler had written to Brown: In 1940, I lost my only brother as a night fighter. On the 20th of December, 4 days before Christmas, I had the chance to save a B-17 from her destruction, a plane so badly damaged it was a wonder that she was still flying. The pilot, Charlie Brown, is for me as
precious as my brother was.
Thanks Charlie. Your Brother, Franz…

WHISNews21 wish to thank the following for this remarkable true story: