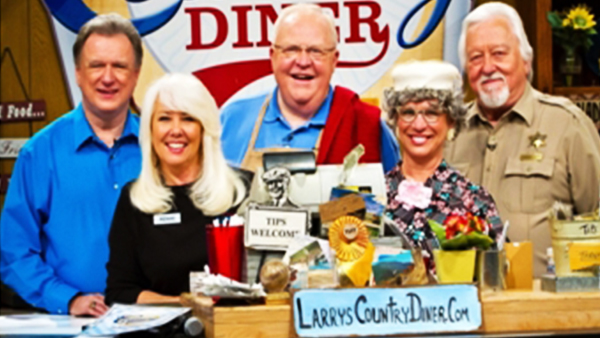 “Larry’s Country Diner,” the beloved, wholesome variety show that has captured the hearts of millions of viewers each month is “decking the halls” and preparing for a great holiday line up in December. Currently one of the top-rated shows on the RFD-TV network, the diner is not your ordinary restaurant, but rather a unique down-home variety show that in just over three short years has become a favorite “eatery” of country fans everywhere. Cornbread and black-eyed peas only complement the heapin’ helpin’ of country music performances served up by the stars of yesterday and today. Larry’s Country Diner continues to fans and garner national attention and has also been added to the FamilyNet lineup — proving that America is “hungry” for this type of programming. For more information on “Larry’s Country Diner,” please visit larryscountrydiner.com.

A new episode of “Larry’s Country Diner” will air each week in December on the RFD-TV network. December’s menu of stars is a “tasty” holiday line up for country music fans:

All Schedules Subject to Change without Notice

Taped bi-monthly in front of a live studio/diner audience at NorthStar Studios (3201 Dickerson Pike, Nashville), the show’s spontaneity is part of the mystique of “Larry’s Country Diner” which contributes greatly to its success. “The prevailing attitude at the diner is ‘…the cameras are always rollin’… and we don’t care,’” explains Larry Black, host and creator of “Larry’s Country Diner.”

The fact that plates are dropped or broken during a performance, a rack of knives and forks are dumped on the floor or that some of the lights go out while they were filming makes the show all that more exciting in a day where even reality shows are produced within strict script guidelines. “It’s the kind of television you just don’t see too much anymore and both the artists and fans love it,” states Black who adds, “We even tell our artists that once the tape starts rolling, it does not stop. If you get yourself in trouble, get yourself out ‘cause we’re not stoppin’.”

Because of its popularity, getting a seat to see a live taping might prove more difficult than getting a reservation at one of L.A.’s most trendy posh restaurants—the first available table is not available until 2013, so you’ll want to plan way in advance. For reservations, please call 615-673-2846 or email paula@gabrielcommunications.com.

Larry’s Country Diner is a unique down-home variety show which integrates entertainment, interviews and music in a weekly format, taped LIVE in front of a studio audience in a country diner setting. The show features regular characters including Black, Keith Bilbrey, Sheriff Jimmy Capps, waitress Renae and avid church lady Nadine, along with special guest appearances by country music artists of yesterday and today. Since its initial airing on August 3, 2009, Larry’s Country Diner has produced nearly 100 episodes and has become one of the most popular shows on RFD-TV, garnering 1.4 million viewers monthly and growing. For more information, please visit www.larryscountrydiner.com.

Larry’s Country Diner is another product of Gabriel Communications, started in 1996. Owned and operated by long-time disc jockey, Larry Black, the company specializes in “Reunion Videos.” The success of this series spurred the creation of more than a dozen more projects featuring hundreds of songs and stories as well as Country’s Family Reunion News, a monthly newspaper which highlights the music of yesteryear. For more information on Country Family Reunion products, please visit: www.cfrvideos.com.

Uncategorized Comments Off on It’s Beginning To Look A Lot Like Christmas At Larry’s Print this News
Kulula Airways Has It’s Fun With Passengers Onboard (Newer)
(Older) Taylor, Kenny Among Highest-Paid Musicians of 2012