Where Was Obama When The Warning Bells Tolled 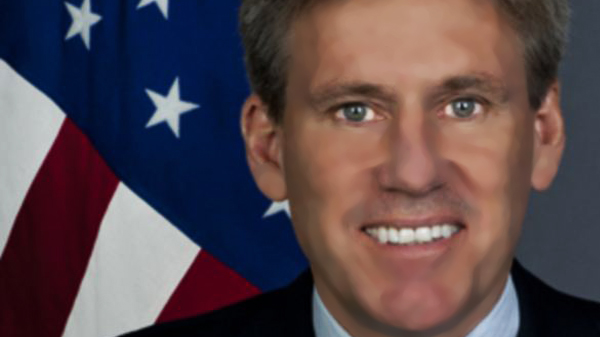 The deadly September attack on a U.S. consulate in Libya was not precipitated by an anti-American protest, as had originally been reported, the State Department disclosed Tuesday night.

According to reports from ABC and the Associated Press, the State Department now acknowledges that “gunfire and explosions near the front gate” were the first signs of danger precipitating the attacks that killed Ambassador Christopher Stevens and three other Americans.
This revelation stands in contrast to the story originally reported by the Obama administration and others, who claimed that a protest against the anti-Islam film “The Innocence of Muslims” outside the American consulate was co-opted by violent extremists.The administration has come under harsh criticism from conservative critics in recent weeks over its actions before and after the attack. The first congressional hearing on the subject is scheduled for Wednesday.
Below is a detailed chronology of the attack, as the State Department now claims it played out (via AP):
Sept. 10-11, 2012:
Stevens arrives in Benghazi and holds meetings on and off the consulate grounds on Sept. 10. He spends the night, and for the 11th anniversary of the 9/11 attacks on the U.S. holds meetings only inside the compound. It is an enclosed area about 300 yards long by 100 yards wide, with a 9-foot outer wall topped by barbed wire and augmented by barriers, steel drop bars and other security upgrades. There are four buildings in the compound. Five diplomatic security officers are present, along with four members of a local militia deployed by Libya’s government to provide added security.
Around 8:30 p.m.:
Stevens finishes his final meeting of the day and escorts a Turkish diplomat outside the main entrance of the consulate. The situation is calm. There are no protests.
Around 9:40 p.m.:
Agents hear loud noises, gunfire and explosions near the front gate. A barracks at the entrance housing the local militiamen is burnt down. Agents viewing cameras see large group of armed men flowing into the compound. Alarm is sounded. Telephone calls are made to the embassy in Tripoli, officials in Washington, the Libyan authorities and a U.S. quick reaction force located at a second compound a little over a mile away.
Grabbing weapons:
One agent, armed with a sidearm and an M4 submachine gun, takes Stevens and computer specialist Sean Smith to a safe room inside one of the compound’s two main residences. It has a heavy metal grill and several locks, medical supplies and water, and windows that can be opened only from the inside. The other agents equip themselves with long guns, body armor, helmets and ammunition at other buildings. Two try to make it to the building with Stevens. They are met by armed men and are forced to retreat. Attackers breach the compound:
Attackers penetrate Stevens’ building and try to break the grill locks for the safe room, but cannot gain access. They dump jerry cans of diesel fuel in the building, light furniture on fire and set aflame part of the exterior of the building. Two of the remaining four agents are in the compound’s other residence. Attackers penetrate that building, but the agents barricade themselves in and the attackers can’t reach them. Attackers try to enter the tactical operations center, where the last two agents are located. They smash up the door but cannot enter the building.
Americans trapped: Meanwhile, Stevens’ building rapidly fills up with thick diesel smoke and burning fumes from the furniture. Inside, visibility is less than 3 feet. Unable to breathe, the Americans go to a bathroom and open a window, but still can’t get enough air. They decide to leave the building. The agent goes first, flopping out onto a patio enclosed by sandbags. He takes immediate fire, including probably rocket-propelled grenades. Stevens and Smith don’t come out of the building. The agent, suffering severely from smoke inhalation, goes in and out of the building several times to look for them. He then climbs a ladder to the roof of the building and collapses. He radios the other agents to alert them to the situation there.The other four agents are able to reunite and take an armored vehicle to Stevens’ building. They reach the collapsed agent and try to set up a perimeter. They take turns going into the building, searching on hands and knees for the missing Americans. Smith is pulled out, dead. Stevens cannot be found.
Reinforcements:
A six-person quick reaction security team arrives from their compound across town. About 60 Libyan militiamen accompany them. They attempt to secure a perimeter around Stevens’ building, and take turns going inside. Taking fire, Libyan forces determine they can’t hold the perimeter. A decision is made to evacuate the compound and return with everyone to the reaction force’s compound.
Evacuation: Agents pile into an armored vehicle, with Smith’s body, and leave through the main gate. They face immediate fire. Crowds and groups of men block two different routes to the security compound. Heavy traffic means they are traveling only about 15 mph, and trying not to attract attention. On a narrow street they reach a group of men who signal for them to enter a compound. They sense an attack and speed away, taking heavy fire from AK-47 machine guns at a distance of only 2 feet, and hand grenades thrown against and under the car. Two tires are blown out. They speed past another crowd of men and onto a main street and across a grassy median into opposing traffic. The agents drive against traffic, eventually reaching their compound. Security gets into firing positions around the compound and on the roof. They take more gunfire and rocket-propelled grenades intermittently for several hours.
More reinforcements:
In the night, a team of reinforcements from the U.S. Embassy in Tripoli arrives on a chartered aircraft at the Benghazi airport and reaches the security compound.
Around 4 a.m.:
The compound’s building is hit by mortar fire. The roof is hit and two security personnel are killed. One agent involved in the attack from the beginning is severely wounded. The men decide to evacuate the city entirely. They spend the next hours securing the annex and moving a large convoy of vehicles to the airport. They evacuate on two flights.
Benghazi, Libya (CNN) — Three days before the deadly assault on the United States consulate in Libya, a local security official says he met with American diplomats in the city and warned them about deteriorating security.
Jamal Mabrouk, a member of the February 17th Brigade, told CNN that he and a battalion commander had a meeting about the economy and security.
He said they told the diplomats that the security situation wasn’t good for international business.
“The situation is frightening, it scares us,” Mabrouk said they told the U.S. officials. He did not say how they responded.

Here are some pictures about the attack found on the Internet

Demonstrators set the U.S. Consulate compound in Benghazi, Libya, on fire on September 11. The U.S. ambassador and three other U.S. nationals were killed during the attack, which came as protesters outside the compound rallied against a movie that unflatteringly portrays Islam’s Prophet Mohammed. Photos: Protesters storm U.S. Embassy buildings 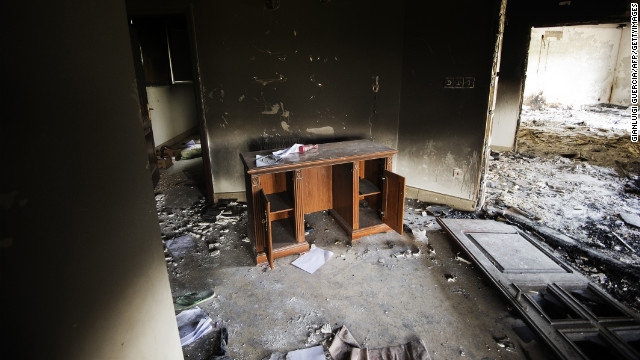 A desk inside the burnt U.S. Consulate building in Benghazi, Libya, on Thursday, September 13, two days after the attack.

The damage inside the burnt U.S. Consulate in Benghazi on Thursday. 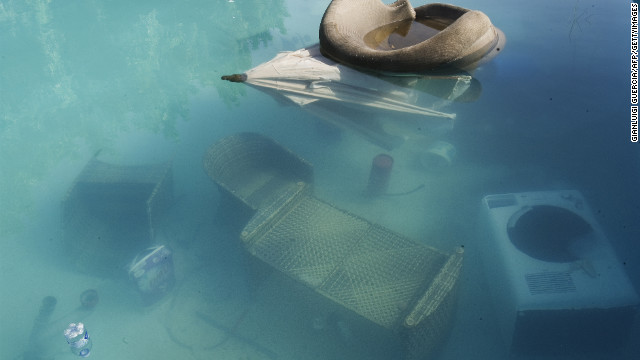 A lounge chair and umbrella float in the swimming pool of the U.S. Consulate in Benghazi on Thursday. 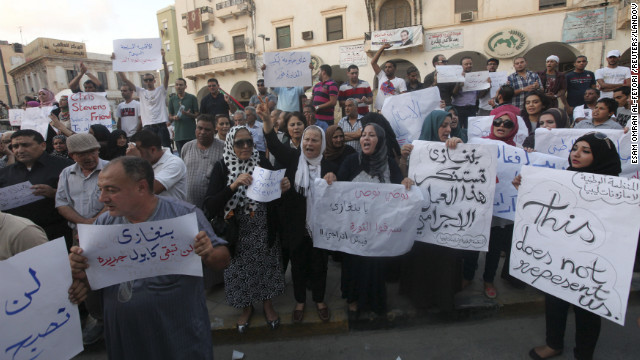 Demonstrators on Wed. Sept 12, gather in Libya to condemn the killers and voice support for victims in the attack on the U.S. Consulate. 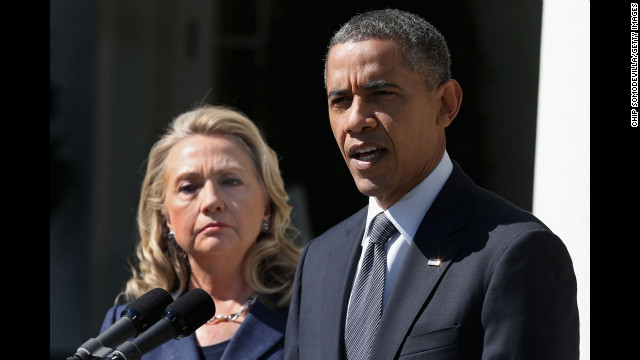 U.S. President Barack Obama was not listening to the warnings, was he and Hillary too busy not to attend to the safety of Americans? 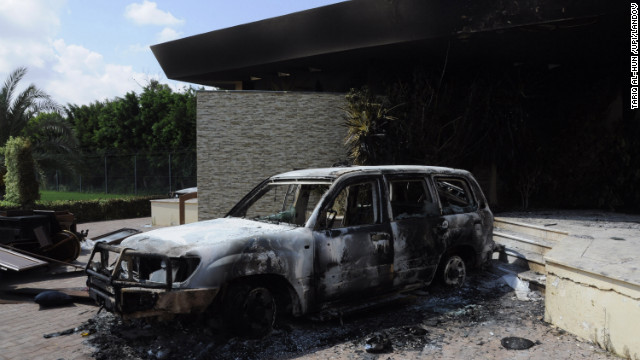 A burnt vehicle is seen at the U.S. Consulate in Benghazi, Libya, on Wednesday. 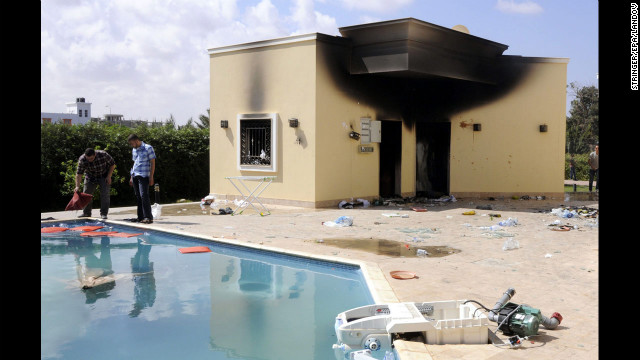 People inspect the damage at the U.S. Consulate in Benghazi, Libya, on Wednesday. 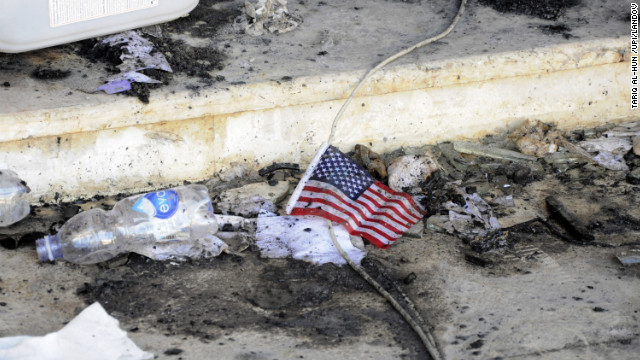 A small American flag is seen in the rubble at the U.S. Consulate on Wednesday. 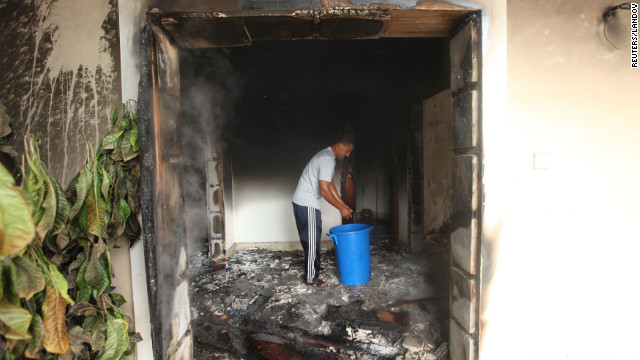 A man stands in part of the burned-out compound Wednesday. 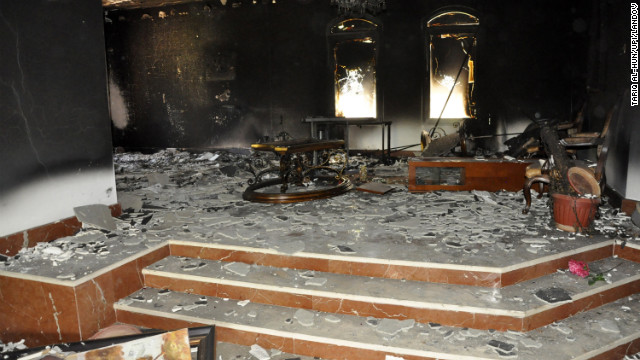 Smoke and fire damage is evident in this consulate building. 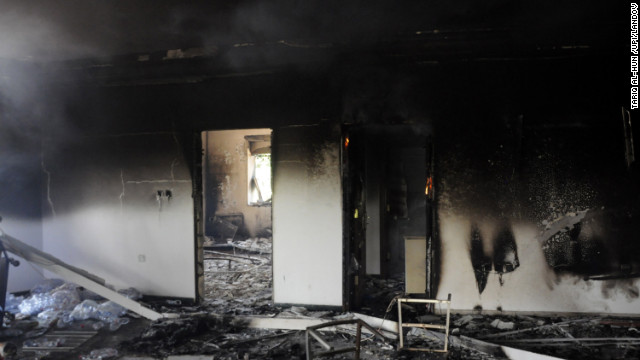 Half-burnt debris and ash cover the floor of one of the consulate buildings.

The U.S. Consulate in Benghazi is seen in flames Tuesday, September 11.

A protester reacts as the U.S. Consulate in Benghazi burns Tuesday night. 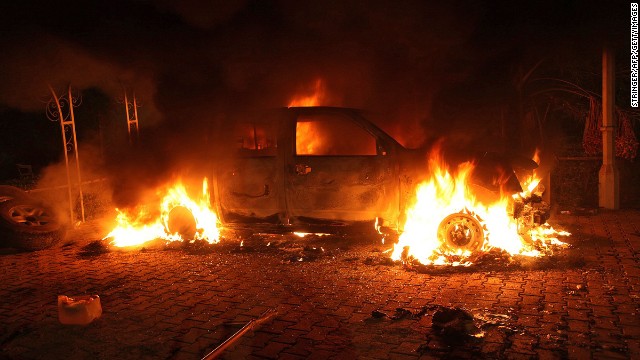 A vehicle and the surrounding area are engulfed in flames after it was set on fire inside the compound Tuesday. 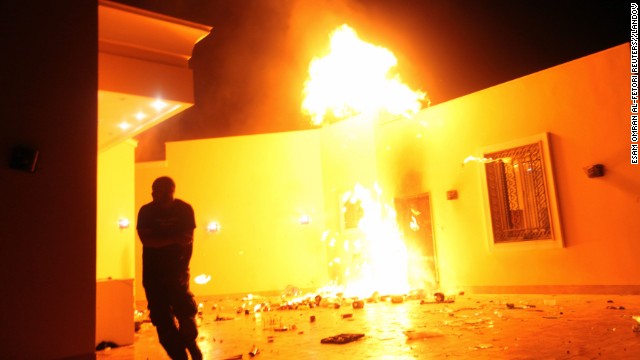 Flames erupt outside of a building in the U.S. consulate compound on Tuesday. 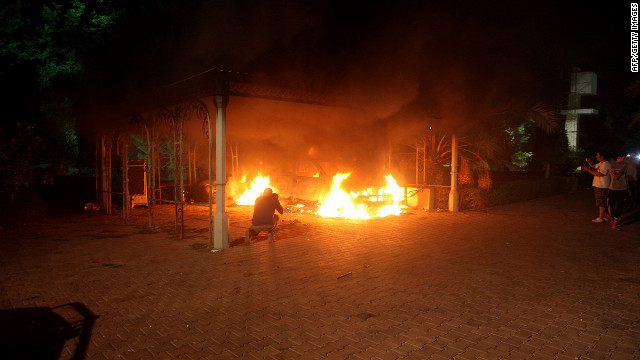 Onlookers record the damage from the attack on Tuesday. 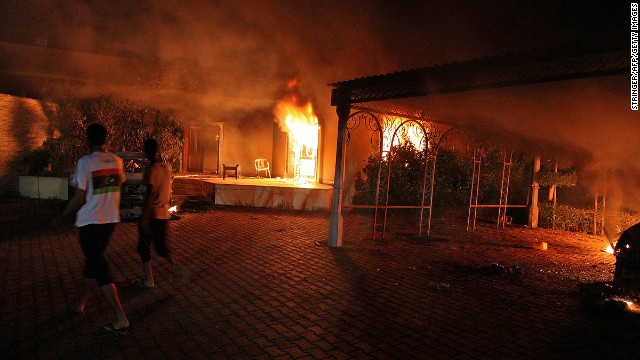 Onlookers walk past a burning truck and building in the compound on Tuesday. 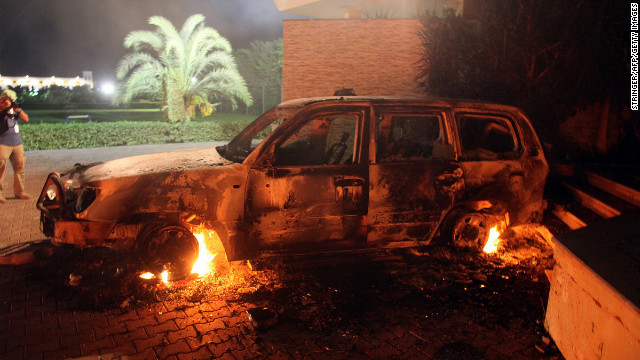 A vehicle sits smoldering in flames on Tuesday. 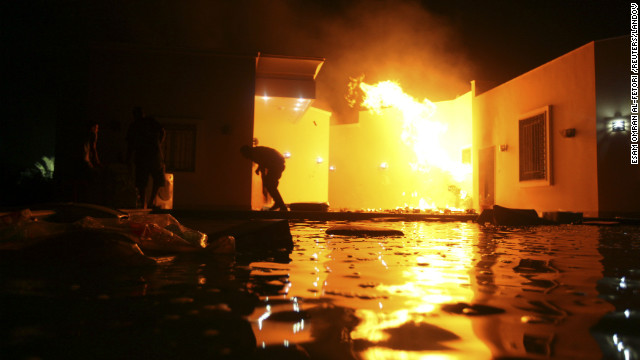 A
attack on the U.S. Consulate in Libya 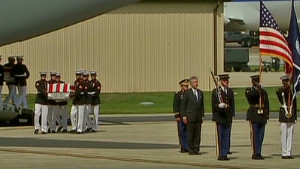 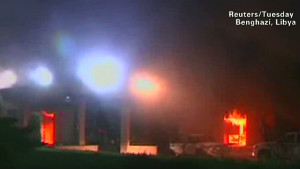 Mabrouk said it was not the first time he has warned foreigners about the worsening security situation in the face of the growing presence of armed jihadist groups in the Benghazi area. Why did Obama not respond to these warnings, was he too busy ?

So the story changes dramatically and no apologies for wrong interpretation?