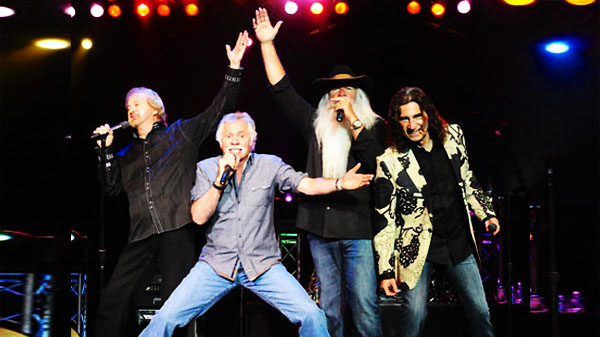 Nashville, Tenn. (October 8, 2012) – The Oak Ridge Boys are making ready to mark 40 years of their phenomenal musical journey and international success.  They’ll be kicking off The Oak Ridge Boys 40th Anniversary Tour on January 19 & 20, 2013 at the historic Grand 1894 Opera House in Galveston, Texas. There’ll be a commemorative CD that features 4 decades of hits and collaborations, plus a network television special. Fans can be on the lookout for a commemorative poster and keepsake memorabilia. Venues across the U.S. and Canada are teaming up as hosts for the Grammy-winning group’s milestone celebration and what’s sure to be a packed performance schedule.  Show stops for the 40th Anniversary Tour will include John Ascuaga’s Nugget, Jamboree in the Hills, and the Kentucky State Fair. Special events will take place for all concerts at the Oak Ridge Boys Theatre in Branson, including America by Rail’s special excursions and train stops at the venue during the tour. Other highlights will include The Oak Ridge Boys Rally at Sea.  The luxury cruise will set sail from February 28-March 4, 2013 with two performances by the group along with a meet & greet session, reception and much more. For more information, please visit: www.oakridgeboys.com.
Photo credit: Mike Payne
Uncategorized Comments Off on Four Decades of Musical Success On TV Special Print this News
Larry's Country Diner And Country Family Reunion TV (Newer)
(Older) Jim Rose Remembers Radio On WHISNews21 Oct 8