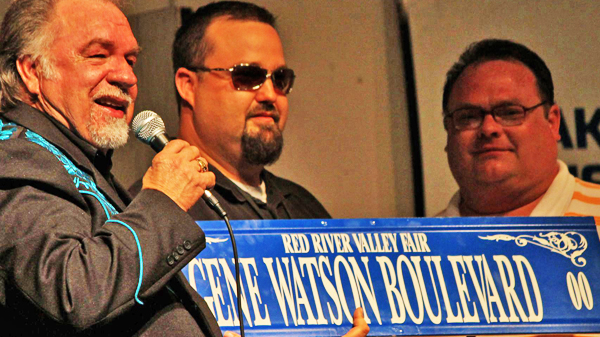 As a tribute to country legend, Gene Watson, in honor of his 50 years in the country music business, the state of Texas declared September 25th to be GENE WATSON DAY.
Furthermore, Watson’s hometown of Paris, Texas named a street in his honor. Early on the 25th, workers with the city of Paris placed three signs proclaiming the main thoroughfare of the Red River Valley Fairgrounds as “Gene Watson Boulevard.”
The street sign was officially given to Gene Watson by the Paris mayor, Dr. AJ Hashmi at the start of Gene’s annual Red River Valley Fair performance.  David Millsap, a longtime fan of Gene’s, initiated the idea and it was quickly passed by the Paris city council.
Texas Governor, Rick Perry, sent a proclamation which reads “The Lone Star State is world–renowned for its wealth of music talent and unique styles of music. Of the many artists who have helped shape Texas country into what it is today, Gene Watson is a favorite among many.  As you celebrate The Red River Valley Fair, I commend you for recognizing this important figure in country music history.”  Watson was also lauded by Texas Senator Kay Bailey Hutchinson, well known radio announcer, Keith Bilbrey and others who sent letters of tribute to the humble Texas entertainer.
Watson, known as “the singer’s singer” and often referred to as one of country music’s finest singers, holds six #1’s, 23 Top Tens and over 75 charted songs including his most requested“Farewell Party”. In 2012, Gene Watson released 25 newly re-recorded hits, the Best of the Best to critical acclaim.  Asked what the day meant to him, Watson replied, “Growing up on a dirt road on the outskirts of Paris, Texas, it never in my wildest dreams occurred to me that one day I’d have a street named for me in my own hometown. I am deeply grateful to the people of Paris, Texas for this great honor. I owe many thanks to David Millsap for initiating the idea and to the entire state of Texas for giving me my own special day.”
For more information on Gene Watson, go to www.GeneWatsonMusic.com
Photo:  Gene Watson, Robbie Gunn of InParisTexas.com and David Millsap.
Contact: Sarah Brosmer, Lytle Management  Sarah@Lytlemgmt.com
Article send in by Marty Martel

Uncategorized Comments Off on The State of Texas Proclaims Gene Watson Day Print this News
Libya attackers linked to al-Qaeda: Obama Whaaat!! (Newer)
(Older) Does It Also Work Like This In Your Part Of The World