Time To Support Chick-fil-A Before It’s Too Late 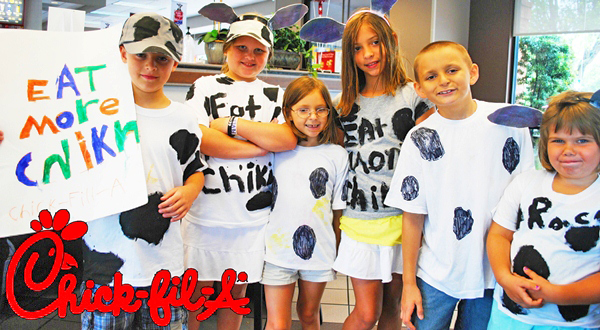 All of a sudden, biting into a fried chicken sandwich has become a political statement.

Chick-fil-A, the fast-food chain known for putting faith ahead of profits by closing on Sundays, is standing firm in its opposition to gay marriage after touching off a furor earlier this month. Gay rights groups have called for a boycott, the Jim Henson Co. pulled its Muppet toys from kids’ meals, and politicians in Boston and Chicago told the chain it is not welcome there. Across the Bible Belt, where most of the 1,600 restaurants are situated, Christian conservatives have thrown their support behind the Atlanta-based company, promising to buy chicken sandwiches and waffle fries next week on “Chick-fil-A Appreciation Day.” The latest skirmish in the nation’s culture wars began when Chick-fil-A president Dan Cathy told the Baptist Press that the company was “guilty as charged” for backing “the biblical definition of a family.” In a later radio interview, he ratcheted up the rhetoric: “I think we are inviting God’s judgment on our nation when we shake our fist at him and say, `We know better than you as to what constitutes a marriage.'” That fired up gay rights advocates, including a group that waged a campaign against the company in recent years by publicizing $3 million in contributions that the Cathy family foundation has made to conservative organizations such as the Family Research Council.”This solidifies Chick-fil-A as being closely aligned with some of the most vicious anti-gay voices in the country,” said Carlos Maza of Equality Matters.

A Chicago alderman vowed to block a Chick-fil-A proposed in his district, and Mayor Rahm Emanuel supported him, saying, “Chick-fil-A values are not Chicago values.” Boston Mayor Thomas Menino wrote in a letter to Cathy: “There is no place for discrimination on Boston’s Freedom Trail and no place for your company alongside it.” In announcing it was pulling its toys, the Jim Henson company said it has “celebrated and embraced diversity for over 50 years.” It directed its revenue from the Chick-fil-A toys to GLAAD, a leading gay rights organization. On the other side of the debate, former Arkansas Gov. Mike Huckabee, a Baptist minister, declared next Wednesday “Chick-fil-A Appreciation Day” to support a business “whose executives are willing to take a stand for the Godly values.” Former Pennsylvania Sen. Rick Santorum, who like Huckabee ran for president as a darling of social conservatives, joined the cause along with religious leaders. “As the son of a dairy farmer who milked many a cow, I plan to `Eat Mor Chikin’ and show my support by visiting Chick-fil-A next Wednesday,” the Rev. Billy Graham said in a statement, referring to the slogan in the company’s ads, which feature cows urging people to eat poultry.

The Rev. Roger Oldham, spokesman for the Southern Baptist Convention, said many Christians want to support businesses owned by fellow believers, and the loyalty intensifies “when Christians see a fellow Christian being persecuted.” “They will come out of the woodwork when a theologically based position is being politicized by individuals for their own purposes,” he said. The Cathy family has never hid its Southern Baptist faith. Since Dan Cathy’s father, Truett, opened the first Chick-fil-A in 1967, the restaurants have been closed on Sundays, and the company refused to reconsider during the 1996 Olympics in Atlanta, sacrificing profits. It also boasts that the Chick-fil-A Bowl is the only college football bowl game with an invocation.

Chick-fil-A posted more than $4.1 billion in sales last year, most of it below the Mason-Dixon Line. Just 14 of its restaurants are in the six states and the District of Columbia where gay marriage is legal. Massachusetts has just two locations, both more than 10 miles from Boston. Illinois, which does not have same-sex marriage, has around a dozen, though only one in Chicago. The company is well-positioned to come through the criticism relatively unscathed, even if it loses new markets in the North and elsewhere, University of Georgia marketing professor Sundar Bharadwaj said. He said that is because Chick-fil-A basically reflects the politics of its customers. At a downtown Atlanta Chick-fil-A on Thursday, customers were divided over the company’s stance. “If you’re a Christian, you believe in the Bible. The Bible says homosexuality is wrong. (Cathy’s) absolutely right,” Marci Troutman said over her breakfast. Her business partner, Steve Timpson, said he chose not to eat at Chick-fil-A: “You’ve got to be more tolerant if you’re going to operate in the wider market in this country.” Nearby, Dustin Keller offered another view of Cathy: “It’s his opinion. He’s entitled to it. I’m just here to eat.”

Comment By “American Mustang” On This Story: In today’s world to be free is to be against anything and everything the Bible preaches, if you practice free speech and it is against the Bible’s teaching then you are free to do so anyway you want to. If you raise your opinion about something the Bible warns you against, then your free speech disappears, and you are offending the free people of the world. If Hollywood and most of the press, want to change the world then there is not  much we can do about it as Christians. We do know that the Bible say’s that all this will come to pass, so why are we so surprised? However, what Christians can do, is to prolong the prophecies of the Bible anyway they can. So right now we believe that as much as everyone else has a right to free speech Christians should also have that same right. So today Chick-Fil-A is being crucified, why don’t Christians go out and help carry their Cross by buying and supporting their food. There is not much you can do as an individual but by buying food at their store goes a long way to help. If Chick-Fil-A closes down the prophecies of the Bible could be accelerated. The choice is still your’s, for how long?, is really up to you. Doing nothing is a recipe for disaster, and besides, I, for one have never had a bad meal at Chick-Fil-A.