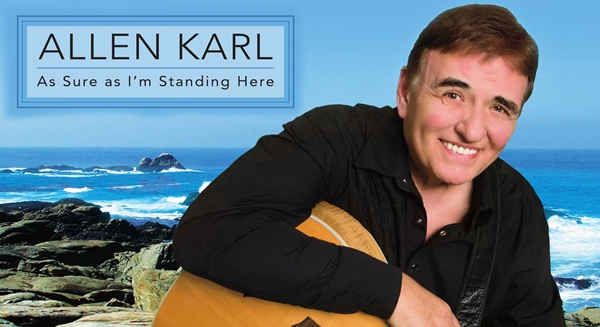 New Music From “ALLEN KARL” Out Now, Latest Single “As Sure As I’m Standing Here”

Allen Karl, Century II Records recording artist has done it again.  When the fiddles and steel guitars are no longer heard on the major radio stations across the country, Allen has come to the rescue for country radio DJ’s with his new single “As Sure As I’m Standing Here,” written by Hall of Fame songwriter, Jerry Foster.  Allen has never walked backwards on his love of traditional music, and from the first note to the last note of this new single, he has brought new life into what country music has been missing for the past 10 years.  He has kept his promise to keep his music country and this song defines what country should be. To make this song even more powerful is the Hall of Fame group of musicians Allen assembled to make this record even more special. Pete Wade-guitar, Lloyd Green-steel guitar, Bob Moore-bass, Gene Chrisman-Drums, Buddy Spicher-fiddle, and Hargus “Pig” Robbins on piano.  A great performance, with Hall of Fame production of most of the original “A-Team” musicians. Allen Karl has won more awards worldwide than most artists in the country music industry and he continues to rack up #1’s, and with this new release he will surely add to his long list of hit records. 2011 was a super year for Allen, being awarded the Male Vocalist and

Album of the Year by the European Country Music Association.  Add to that his collaboration with his duet partner, Donna Cunningham on their gospel #1, “Jesus Heard Every Word,” plus their current new duet single “Your Name Is On My Lips Again,” which is climbing to #1 worldwide, and you are witnessing a great success story.  2012 and 2013 are no doubt filled with great new music from Allen with a new project, touring in Europe, more duets with Donna Cunningham, and great country music for his fans and all of his DJ’s friends. Country Music has a history, and Allen Karl is a major part of its history because he has been true to his love of the music, when you hear this new single, “As Sure As I’m Standing Here.”

The promotional teams that work with Allen are as follows: