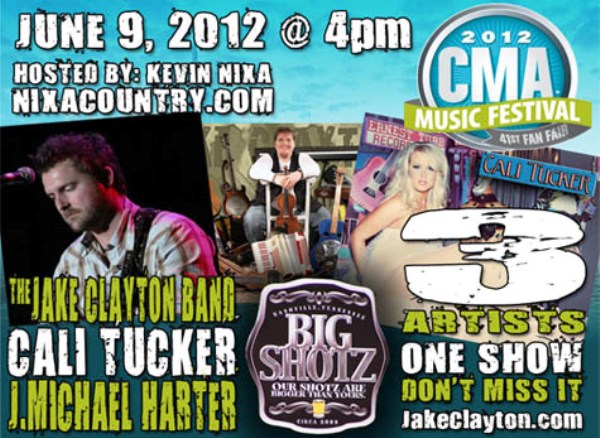 Jake Clayton will be making multiple appearances during this year’s CMAFest! Be sure to catch the debut performance of Jake’s new live show on June 9th at Big Shotz on 2nd Ave. Not only will Jake and his band be performing, but they will also be the backing band for special guests Cali Tucker & J. Michael Harter! This will be a fun, uptempo, plugged in and rockin’ show. Don’t miss it! You can also catch Jake performing as the utility player for Republic Nashville’s Sunny Sweeney!

Also catch Jake Clayton out on the road performing with Republic Nashville’s Sunny Sweeney on Gary Allen’s 2012 Country Throwdown Tour. Check Jake’s website for all of the dates! www.JakeClayton.com

Uncategorized Comments Off on Independent Artists on this years CMA Music Fest Print this News
Last Recordings of Waylon Jennings Out Soon (Newer)
(Older) Cheryl K. Warner Is Named As Artist Of The Year