Bill Anderson Get’s Bumped From Behind in The UK 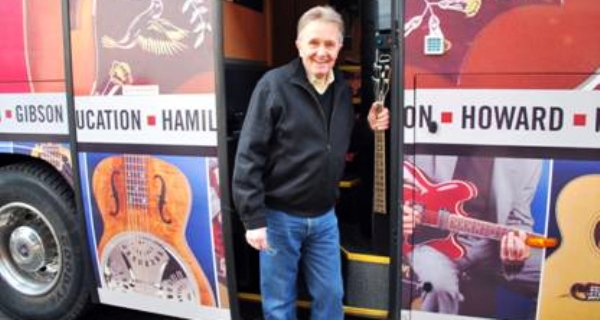 The CMA Songwriter Series — which is currently on a brief tour of Ireland and the UK — literally became a “smash hit” Thursday, Feb 23, when a passenger car collided with the rear end of a Gibson Bus carrying performers Whisperin’ Bill Anderson, Bob DiPiero, and Clint Black. The entertainers were on their way to do a live concert at Whelan’s in Dublin when the accident occurred. None of the performers or crew members were injured and bus damage was minor. However, it did cause a 30-minute delay in the show’s start time. Whisperin’ Bill, who is seen here boarding the bus earlier, quipped “This accident happened when we were all on a GIBSON BUS – but it turned out to only be a FENDER-bender – thank goodness!” prbetty@comcast.net