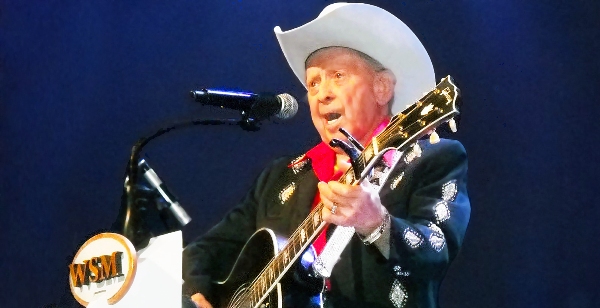 Never too late to wish a  Country Music Hall of Famer a happy Birthday, Jimmy Dickens the Grand Ole Opry’s oldest living member, turned 91 years old on Dec. 19.
Dickens is a walking country music history book, and a link to long-gone country heroes such as Roy Acuff (who brought Dickens to the Opry in 1948, 10 years before contemporary country star Taylor Swift’s mother was born) and Hank Williams (who gave Dickens his nickname, “Tater”).
In the 1960s, he became the first country performer to “circle the globe” on a world tour that included stops in Tokyo, Okinawa, Taipei, Bangkok, Saigon, Turkey, Denmark, Germany and Montreal. And he remains among the Opry’s most popular and amiable attractions, greeting the audience in dazzling outfits that the diminutive Dickens jokes make him look like “Mighty Mouse in his pajamas.”
“Sometimes I can’t believe that I’m thought of as someone who’s contributed to this industry,” Dickens told The Tennessean in 1995, when Swift was 5. “It’s hard for me to explain how I feel about it. Because country music is my life. I’ve lived it.”
Since then, he’s kept on living it, starring in Brad Paisley videos, appearing on the CMA Awards and, most of all, serving as the Grand Ole Opry’s sparkling, joke-telling ambassador.
News article sent in by Keith bradfrord kmarecords@aol.com
Uncategorized Comments Off on Happy Birthday Little Jimmy Dickens With A Big 91 Print this News
Allen Karl To Raise Money For Children’s Hospice (Newer)
(Older) NBRN.FM Premier’s Top 30 Download Chart