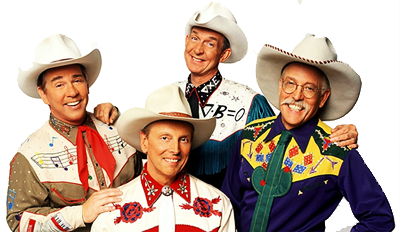 Legendary Riders In The Sky member Woody Paul Being Honored by National Fiddler Hall of Fame“King of the Cowboy Fiddlers” Set to Be Inducted at Special Ceremony in 2012Nashville, TN (December 12, 2011) — Riders In The Sky lead singer/musician Woody Paul has been selected as one of the distinguished 2012 inductees into the National Fiddler Hall of Fame. The induction gala will take place on Saturday, April 14th at the historic Cain’s Ballroom in Tulsa, Oklahoma. Riders In The Sky will be taking center stage as headlining performers during the celebration. Known as “King of the Cowboy Fiddlers,” Woody says being inducted is an honor that is truly one of a kind. “It’s amazing…and I’ve never practiced for it!” Other inductees for the 2012 class are Herman Johnson, Kenny Baker and Keith Coleman. Previous National Fiddler Hall of Fame inductees include: Roy Acuff, Bob Wills, Dick Barrett, Johnny Gimble, Claude “Fiddler” Williams, Johnnie Lee Wills, Buddy Spicher, Rufus Thibodeaux, and Chubby Wise.

The National Fiddler Hall of Fame is a non-profit organization that is committed to offering workshops, mentoring programs and educational community outreach. Its advisory board consists of notable fiddlers, celebrities, and entertainment industry executives including Roy Clark, Jim Halsey, Mark O’Connor, and Byron Berline. Perhaps best known for their recording of “Woody’s Round Up” from “Toy Story 2,” Riders In The Sky have been keepers of the flame passed on by the Sons of the Pioneers, Gene Autry and Roy Rogers. The seven-time Western Music Association Entertainers of the Year and 2-time Grammy winners have been stars of the stage, screen, network television, the Grand Ole Opry, National Public Radio, and Sirius XM Satellite Radio. The group’s latest CD, Land Beyond The Sun, boasts 13 tracks and offers a collection of songs recorded in the Western tradition that Riders In The Sky fans have come to expect along with classic humor which has been the trademark for “America’s Favorite Cowboys” for more than 30 years.