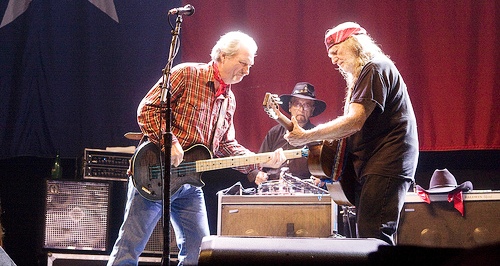 Dan “Bee” Spears, who spent more than 40 years as a lynchpin of Willie Nelson’s band, died Thursday night of exposure to the elements, after slipping and falling outside his Nashville property. Mr. Spears, who began performing with Nelson when he was 19 years old, was 62. He was born Dan Edward Spears in Helotes, Texas, outside San Antonio. Raised in a musical family (his father was a fiddler), he joined Nelson’s band in 1968, at the recommendation of legendary steel player Jimmy Day. He remained with Nelson through the Country Music Hall of Famer’s transition from Nashville-based country music to the heights of the freewheeling “Outlaw Movement” and into the new century. Mr. Spears’ steady bass work was a key element in Nelson’s Family Band. When Nelson would take experimental guitar excursions, Mr. Spears provided steadying bass lines that kept things from moving out of bounds. At other times during concerts and on albums, he and Nelson would play melodic figures together, shifting as one. He played on Nelson’s best-known albums, including Red Headed Stranger and Stardust, and also recorded with notables including Waylon Jennings, Leon Russell, Guy Clarkand Jerry Jeff Walker. When not on the road with Nelson, Mr. Spears often performed around Nashville in a combo called Travelin’ Light, with Richie Albright, the longtime drummer for Jennings, and bluesy singer-songwriter-guitarist Ricky Ray. In addition to his musical work, Mr. Spears appeared in movies including Honeysuckle Rose and Songwriter.

This article forwarded for publication by Marty Martel

Uncategorized Comments Off on Dan “Bee” Spears bass player for Willie Nelson dies Print this News
Bradford Files: You Are On The Air (Newer)
(Older) Hottest Country Stars Together For Gospel Duet