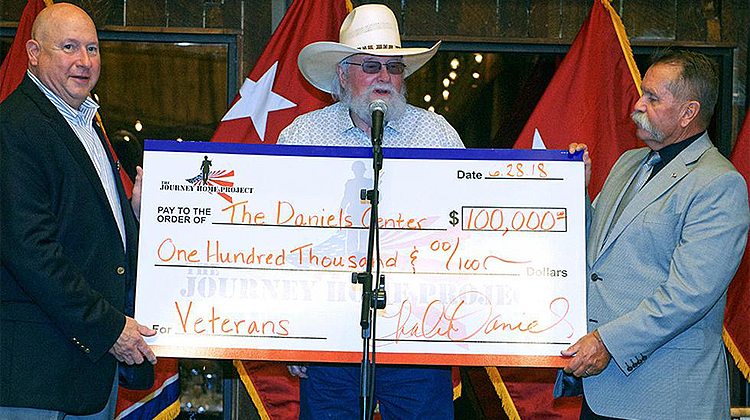 Charlie Daniels is always on board to help the military and our veterans, and this year he raised $100,000 for a veterans support program he helped found at Middle Tennessee State University

Daniels held his inaugural Veteran Impact Celebration at the Grove at Williamson Place in Murfreesboro, Tenn., on June 28. The event featured live performances from student veterans and guest speakers including retired U.S. Army Lt. Gen. Keith M. Huber, who serves as MTSU’s senior adviser for veterans and leadership initiatives, and MTSU President Sidney A. McPhee. Singer-songwriter Scott Brown of the Scooter Brown Band also performed; he is a veteran of the Marine Corps. The event raised a total of $171,000.

“It was so gratifying to see the level of public support for our veterans …” Daniels says in a press release. “There was such a feeling of unabashed patriotism and coming together for a worthy cause. I want to thank all the good folks who came out and ask that you save a night for us next year when we do it again.”

Daniels also gave some remarks at the event before performing two of his patriotic songs, “My Beautiful America,” and “In America.” His manager, David Corlew, and Major General Terry “Max” Haston joined Daniels onstage to present a check for $100,000 to MTSU’s Daniels Center, which a news release describes as “the largest and most comprehensive veterans center on any Tennessee higher education campus.”

The 3,200-square-foot facility allows its more than 900 veteran students to have a centralized place for all of their educational needs, where they can get together, study and get help from other veterans who serve as peer advisors and sponsors. There’s also a Transitioning Home Office to assist student veterans and other students in making the transition from being a college student to getting their career underway. Daniels has already announced that next year’s Veteran Impact Celebration will take place on Thursday, June 27, 2019.

Uncategorized Comments Off on Charlie Daniels Check For $100,000 to Help Veterans Print this News
Blake Shelton Jokes He’s A Gwen Stefani ‘Stalker’ (Newer)
(Older) MusicCityGhost: What Is Wrong With Our Lakes?