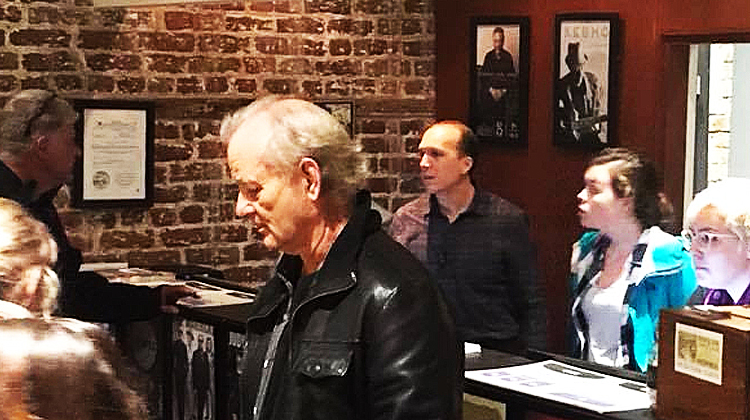 Bill Murray Buys Remaining Tickets to SteelDrivers Show, Hands Them Out to Fans

A long-standing staunch supporter of music, Bill Murray has been caught red handed going nuts at Chris Stapleton concerts and other live events, and is a huge fan of one of Stapleton’s first projects, the hard-driving bluegrass band The SteelDrivers. Stapleton moved on, but The Steeldrivers keep going, and were performing at the Charleston Music Hall in South Carolina Thursday, November 9th.

So Murray shows up to the concert, heads to the box office, buys every ticket remaining for the show, and hands them out to everyone who is standing in line. This is according to attendee Adam Glockler, who witnessed Bill’s moment of altruism and snapped the above photo. Bill Murray is a resident of Charleston, and is known to show up around town, snapping selfies with fans, and being the town’s most famous, and most friendly resident.

Bill Murray first met The SteelDrivers in 2010 when he played the part of a funeral parlor owner in the movie Get Low, starring Robert Duvall and Sissy Spacek. The SteelDrivers contributed heavily to the movie’s soundtrack, and that’s where Murray’s fandom was struck.

At a time when it feels like famous people are in the news for all the wrong reasons, it’s good to see a story of one who understands the importance of people, community, and music.

Frontman Gary Nichols recently left the SteelDrivers, with Adam Wakefield of The Voice fame filling in on certain dates. They are playing in Texas later this week, and then a two-night stint at Nashville’s 3rd and Lindsley December 1st and 2nd.