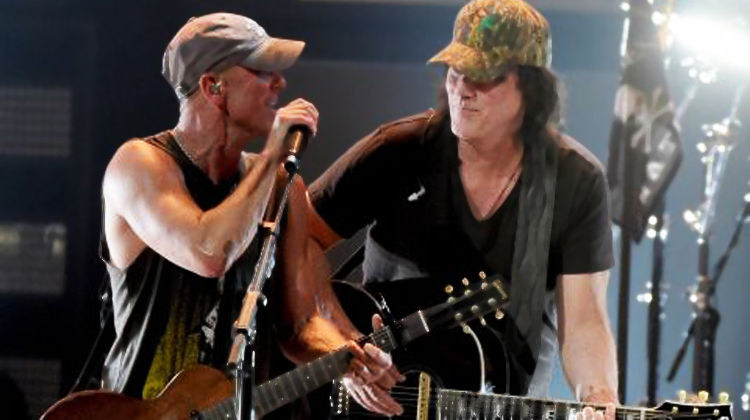 And when CMT’s Hot 20 Countdown caught up with Chesney, he admitted that that song was much more than just a one-time cover. “David Lee Murphy has been such a big part of my life. The first song of his that I recorded was a song called ‘Living In Fast Forward,’” Chesney said. “Since that moment, David Lee Murphy and his creative spirit has been a constant in my life.”

The feeling must be mutual, because Murphy is about to release his own solo album No Zip Code, and Chesney is co-producing it with Buddy Cannon. “I didn’t think I’d ever get out here and do this again. You focus on writing, and that’s its own kind of great. But Kenny and I got to talking, and it seemed like something worth doing.

“Then when we got in the studio, it felt so good, every day was more exciting than the one before,” Murphy told ABC Radio

The live “Dust on the Bottle” duet was recorded when Chesney was playing the Flora-Bama club in Perdido Key, Florida. “I brought David Lee Murphy up there to sing ‘Dust On The Bottle,’ which is probably one of the biggest anthems of our generation; I mean it was just a huge record for him.

“You hear that song in every bar all over the country on any given night,” he said, adding that he could tell that the 40,000 fans loved the moment and the music. “And that’s what I wanted this live album to represent is that heart and that connection, and so ‘Dust On The Bottle’ with David Lee Murphy had to make it.”

An all-new CMT Hot 20 Countdown will premiere the official video of Chesney and Murphy’s live collaboration of “Dust on the Bottle.” The show airs Saturday and Sunday (Oct. 28-29) at 9 a.m. ET.