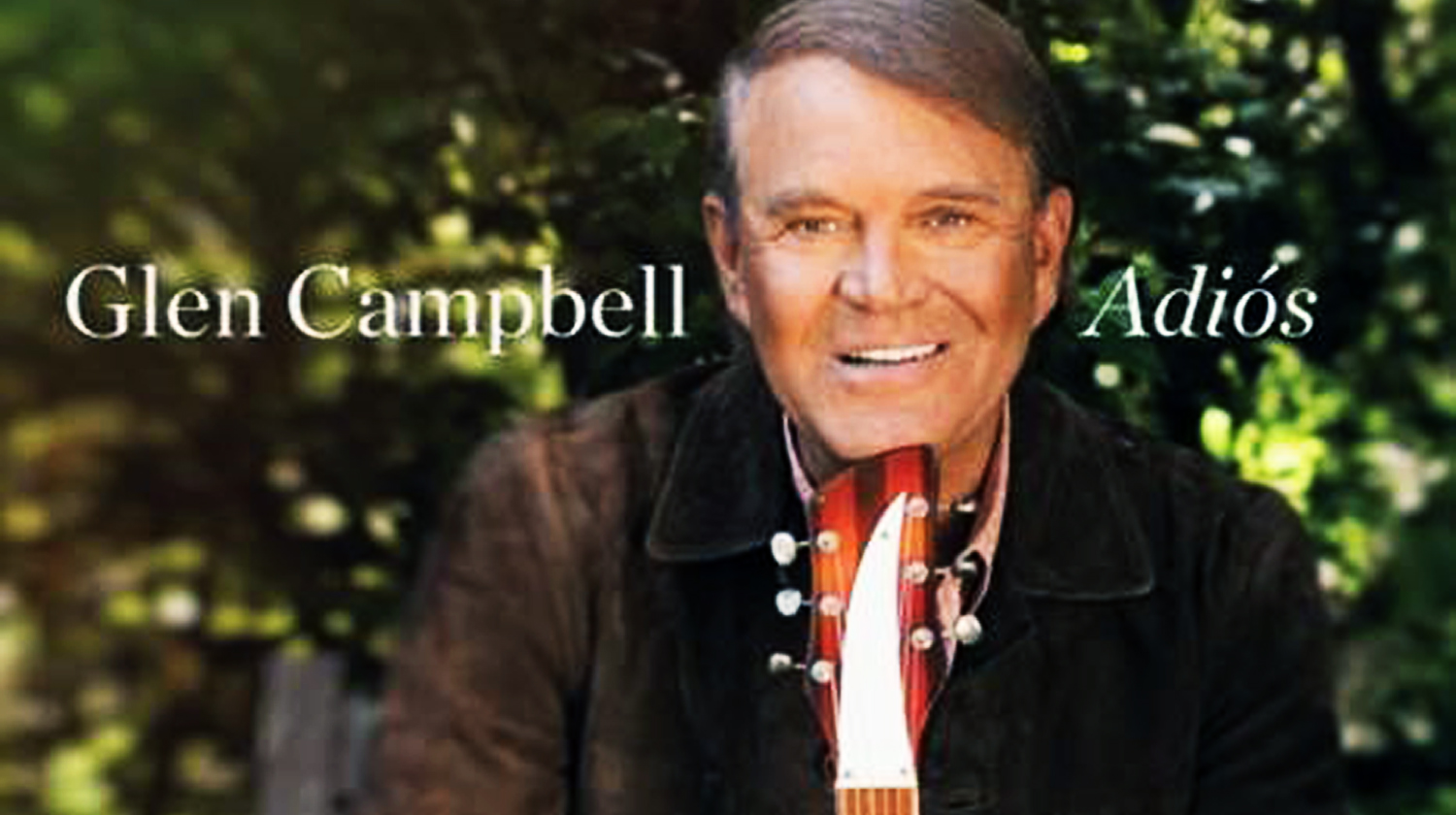 Legendary singer and guitarist Glen Campbell’s final studio album, Adiós, will be released June 9th on UMe, capping off an extraordinary career that has spanned more than five decades and 50 million albums sold. The album will be released on CD, vinyl and digitally and is available for pre-order beginning today.

Adiós was recorded at Station West in Nashville following Campbell’s “Goodbye Tour” which he launched after revealing he had been diagnosed with Alzheimer’s disease. The album was announced today via People.com with an exclusive statement from Kim Campbell, Glen’s wife of 34 years. In her touching notes, Kim reveals the genesis of the album, details the recording process and explains why Adiós is finally being released. Kim writes: “A new Glen Campbell album coming out in 2017 might seem a bit odd since he hasn’t performed since 2012, and even more odd – if not absolutely amazing – when you consider that he has Alzheimer’s disease. Glen’s abilities to play, sing and remember songs began to rapidly decline after his diagnosis in 2011. A feeling of urgency grew to get him into the studio one last time to capture what magic was left. It was now or never.” She concludes, “What you’re hearing when listening to Adiós is the beautiful and loving culmination of friends and family doing their very best for the man who inspired, raised, and entertained them for decades – giving him the chance to say one last goodbye to his fans, and put one last amazing collection of songs onto the record store shelves.” Head over to People.com to read Kim Campbell’s full note as well as hear the album’s first track, “Everybody’s Talkin’,” Campbell’s take on the Fred Neil-penned hit made famous by Harry Nilsson in the film “Midnight Cowboy.”

For Campbell’s final recording session, Glen and Kim turned to Glen’s longtime banjo player and family friend Carl Jackson to helm the production, play guitar and help his old friend. In preparation for the recording, Jackson, who joined Campbell’s band in the early ‘70s as an 18-year-old banjo player, laid down some basic tracks and vocals for Campbell to study and practice. Jackson encouraged him every step of the way and although Campbell struggled at times because of his progressing dementia, he was clearly ecstatic about being in the studio. The 12-track collection features songs that Campbell always loved but never got a chance to record, including several from Jimmy Webb, his longtime collaborator behind some of his biggest hits like “Wichita Lineman” “By The Time I Get To Phoenix,” and “Galveston.” In addition to the bittersweet title track, “Adiós,” first popularized by Linda Ronstadt, Campbell also sings Webb’s longing love song “Just Like Always” and country weeper “It Won’t Bring Her Back.” He revisits “Postcard From Paris” with his sons Cal and Shannon and daughter Ashley singing the line, “I wish you were here,” resulting in a powerful and heartfelt message of a family singing together one last time.

Adiós sees Campbell putting his spin on several classic songs including “Don’t Think Twice It’s All Right,” inspired by Jerry Reed’s version of Bob Dylan’s timeless tune and “Everybody’s Talkin’, a banjo-filled take on the song that Campbell never recorded but famously performed on the “Sonny & Cher Show” in 1973 with a 19-year-old Carl Jackson. Campbell’s daughter Ashley plays banjo on the song and joins her dad on several tracks on the album. Other songwriters featured include Roger Miller with “Am I All Alone (Or Is It Only Me),” which begins with a home recording of Miller singing the tune at a guitar pull before going into Campbell’s rendition with Vince Gill on harmonies, Dickey Lee’s honky tonk heartbreaker “She Thinks I Still Care” and Jerry Reed’s Johnny Cash hit “A Thing Called Love.” Willie Nelson joins his old pal for a poignant duet of Nelson’s 1968 “Funny How Time Slips Away” while Jackson tells Campbell’s life story in “Arkansas Farmboy.” “I wrote ‘Arkansas Farmboy’ sometime in the mid- to late-‘70s on a plane bound for one of the many overseas destinations I played with Glen between 1972 and 1984,” reveals Jackson. “The song was inspired by a story that Glen told me about his grandpa teaching him ‘In The Pines’ on a $5 Sears & Roebuck guitar when he was only a boy. That guitar led to worldwide fame and fortune, far beyond what even some in his family could comprehend.”

Adiós was a labor of love and a way for Glen Campbell to have one more chance to do what he loves to do and leave a musical gift for fans. Campbell, who turns 81 on April 22nd, is in the final stages of Alzheimer’s disease. He lives in Nashville where he is surrounded by his loving family and getting the very best of care.