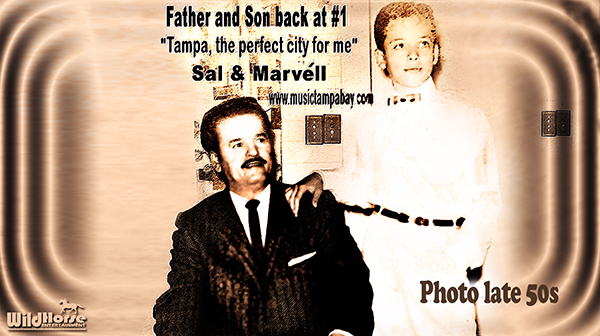 “Tampa, The Perfect City For Me” #1 for the 8th time this year in Cigar City!

AirplayExpress is reaching far and wide with the current Latin/Cuban bilingual hit “Tampa, The Perfect City For Me”, #1 for the 8th time this year in Cigar City!

The Tampa song may wind up as Song Of The Year at Music Tampa Bay now airing daily on the Tampa  FM station WMTB 96.7.

The Marvell original was acknowledged by Tampa Mayor the honorable Bob Buckhorn when he acknowledged James Marvell’s late dad Sal in 2012.

One of the many photo’s James is lucky to have with his legendary Dad Sal, this one on the left taken in the later part of the 1950’s while Elvis was still rocking and rolling across the world.

Everyone can VOTE for SAL & MARVELL on a daily basis at: www.musictampabay.com to keep them in the Top 10 – Thank you!