Louis-John Botha, 64, is the second farmer in the Waterberg district of Limpopo to be killed this year.

Susan Kotze, 76, was also murdered on her farm near Lephalale in January.

According to the report, Botha had practised as a doctor in Swartwater for many years. He lived on the farm Gwelo Safaris about 12km from Swartwater. Limpopo police are not sure exactly how Botha was killed. Trackers and the canine unit are searching the area and looking for clues. Botha was alone at the lodge over the weekend while his girlfriend visited friends in Pretoria. She became concerned when she was not able to get hold of him on Sunday and called neighbours, who went to his house and noticed there had been a break-in. Blood was found on the porch and inside the double-storey thatch home. The safe had been opened and items were missing. Police were called and a search was launched. The body was only found on Monday morning, hidden about 200 metres from the house. Botha, who was divorced, leaves behind two daughters and an elderly mother. The family was too shocked to speak on Monday, his son-in-law said. 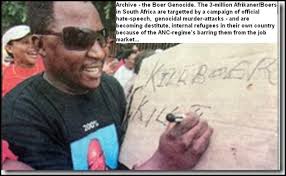 Meanwhile, national police commissioner Riah Phiyega denies there is an increase in Farm Murders. The police refuse to release official farm murder figures but keep records. AfriForum said there has been a gradual increase in farm attacks and farm murders across South Africa. – NEWS24

A voice of disapproval towards the horrific farm attacks in South Africa over the past few year has recently sparked an unexpected outrage in the United States as more and more people are raising their voices objecting to the apparent Genocide against white people in South Africa. Recently a Country Rock Band out of the Unites States, “Tattoo Billy” wrote a song, “Tercias Veld” about the events of the, “Night Of The Long Knives” and posted it on YouTube. Tattoo Billy have already created quit a following in South Africa after their first CD release titled, “The Children Of Ham” both these video’s are in support of the victims of Farm Murders in South Africa – WHISNews21