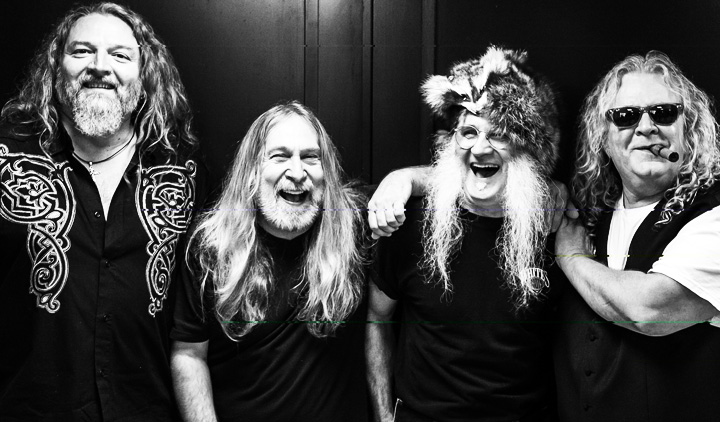 NASHVILLE, Tenn. (October 17, 2014) – It was the album that Nashville – or the music industry as a whole – didn’t quite know what to do with. But, the fans quickly figured it out. On October 17, 1989 – twenty-five years ago today – Mercury Records released the albumPickin’ On Nashville, the debut disc from The Kentucky Headhunters.

The band originated in 1968 and was comprised of Richard and Fred Young, along with cousins Greg Martin and Anthony Kenney. They didn’t look or sound like any other groups in the business, they were more comfortable in t-shirts and jeans than your typical stage attire – and their sound was a hybrid of Country, Southern Rock, and Blues.

Growing up in Edmonton, KY on a family farm, the band had played together for over twenty years prior to their big break. That time period included a couple of brushes with the spotlight. Under the name Itchy Brother (Richard Young recalls the name came from a scraggly lion from the cartoon Bongo Congo), the group were groomed by Capricorn Records in the 1970s, and almost signed with Led Zeppelin’s Swan Song Records in the early 1980s. However, the third crack at the big time proved to be the charm.

With a lineup that now included bass player and vocalist Doug Phelps, and his brother, Ricky Lee, the die was firmly cast for stardom. Having created a buzz with their live appearances in the Southern Kentucky area, as well as “The Chitlin’ Show,” their popular radio show at WLOC in Munfordville, by 1988, the Headhunters were ready to take their sound nationwide. Encouraged by their fans and friends like Tom Long, Larry Shell, and manager (and former Swan Song exec) Mitchell Fox, the boys agreed to roll the dice and take their music to Nashville.

Richard Young remembers their showcase in Nashville. “As soon as I hit those first chords of ‘Walk Softly on This Heart of Mine,’ it looked like someone yelled “’There’s a bomb in here!’ With the exception of the bartender, waitress and a few friends, we cleared Douglas Corner. One man was left standing, Harold Shedd, then president of Mercury Records. He came up, took one of our homemade albums and left. The next day he called and said, ‘Boys, we may be cooking hamburgers next year, but I gotta try this.”

Shedd’s gamble proved to be right on the money. “Walk Softly On This Heart Of Mine,” the Bill Monroe classic was released as the first single, hitting the Billboard Country Singles chart on September 30, 1989. Radio didn’t know what hit them, as the group watched the single move up the charts.  Though the single only made it to No. 25 on the charts, Stan Hitchcock at CMT was paying attention, and the video spread the music of the Kentucky Headhunters around the nation like wildfire.

Pickin’ On Nashville included three more singles, “Dumas Walker,” “Rock and Roll Angel,” and their top-ten cover of Don Gibson’s “Oh Lonesome Me.” When the dust settled, the disc sold well over two million copies, and was named as the 1990 Album of the Year by the Country Music Association – not bad, when considering the group recorded the album in three days for only $4500 – an unheard of amount of time and money then and now. The success of the album also led to back-to-back wins for Vocal Group of the Year from the CMA in 1990 and 1991. They also won the Academy of Country Music trophy for Vocal Group of the Year, an American Music Award, and the most coveted award in all of music – a Grammy Award for Best Country Performance by a Duo or Group with Vocal for the album. Their fan base would also include some of the biggest artists of all time, such as ZZ Top. Young recalls a conversation he once had with the architects of Rock & Roll, Carl Perkins.  “You know Carl, I was beginning to think we would never get an album out,” he told the man behind “Blue Suede Shoes.”  To which Perkins replied, “Yeah buddy, but when ya’ll came out, you came out sideways!” Truer words were never spoken.

All of these years later, the success keeps coming for the Kentucky Headhunters. Never one to be pigeon-holed in any one specific genre, the group continues to tour and record to this day. All in all, they have released thirteen albums, including their self-titled disc this year. They also continue to play to packed houses both here in the United States and abroad.

To celebrate the 25th anniversary of Pickin’ On Nashville, the Headhunters will be featured in a special article on Billboard.com this weekend where The 615’s Chuck Dauphin ventured from Nashville to the group’s “Practice House” in the Edmonton, KY to recall the impact that the record made – and continues to make. Also, the Kentucky Headhunters will be featured in special programming on SiriusXM this weekend, sharing their reflections and memories of the music. Richard Young sums up his feelings on the group’s success, saying simply “We are lucky boys, who have lived a charmed life.”