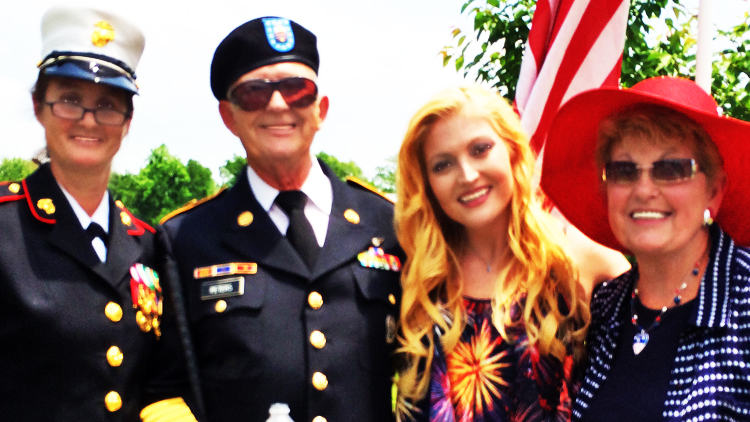 GALLATIN, Tenn. – The American flag is a special part of any Memorial Day ceremony. The Stars and Stripes played a prominent role in Sumner County, with the dedication of a monument for veterans who can no longer see.

A new bronze Braille version of the American flag was unveiled to honor the 1.3 million blind veterans in the United States. The dedication was not about what you see, but what you feel.

“This is it. You can feel it,” said retired U.S. Army Staff Sergeant Walt Peters. Memorial Day was special for Peters this year. “I’ve been blind now for about 15 years,” he said. Peters served three tours in Vietnam. He said a little thing like not being able to see does not bother him. “I just look at things a little differently, but I’ve got my faith. ‘Can’t’ is not in my attitude, you know,” he said.

“Walt’s dedication of the American Braille Flag was a part of their annual Memorial Day celebration at the Sumner County Veterans Park.  It is now on permanent display at the entrance to the veterans wall.” Keith Bradford

“You can feel the stars and stripes and you can feel everything on it,” said Peters.

The Braille dots indicate the red or white color of the stripe. The Pledge of Allegiance is written across the red stripes. The monument was made by disabled and homeless veterans by the Kansas Braille Transcription Institute in Wichita, Kansas.

“The purpose of the Braille Flag is to give homeless and handicapped veterans a job,” said Peters.

Peters said the monument gives him the inspiration to remember the days he served his country in faraway places.

“I can feel that old flag and think of many a day not only (Vietnam), but Hawaii – and many other good things,” he said. Now in Gallatin, every veteran will be able to feel their memories.

“We can’t see with our eyes but we can see with our hearts, and that’s what this flag is all about,” said Peters.

Peters has been blind for about 15 years. He said he gradually became blind after getting sick from Agent Orange, a chemical used during the Vietnam War to kill forests and other vegetation, and deprive the enemy of food and cover.

He also has diabetes.

Peters hoped to place these monuments in all the VA hospitals across the country.

This dedication of the American Braille Flag was a part of their annual Memorial Day celebration at the Sumner County Veterans Park.  It is now on permanent display at the entrance to the veterans wall.