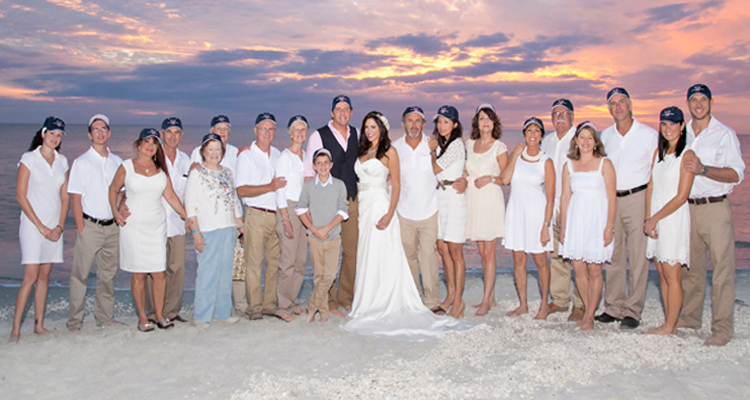 The country artists tied the knot on Sunday, Nov. 10 on Captiva Island, Fla. It was obvious the nuptials were imminent, as in October Atkins hinted that he’d be getting married next month, though he didn’t offer much more in the way of detail.
The ceremony was intimate — only 20 guests were in attendance. Atkins’ son Elijah served in the all-important role of Best Man. Charles Hutchins — founder of the Holston United Methodist Home for Children, where Atkins spent his infancy prior to being adopted — was the officiant.
During the ceremony, Atkins and Falcon recognized the 51st anniversary of Allen and Margaret Atkins by presenting Margaret with a three-carat aquamarine ring. That particular stone was chosen because it is Rodney’s birthstone. Needless to say, careful thoughts were put into all aspects of the wedding.
Falcon proved to be a crafty and creative bride, fashioning some of the decorations herself, such as the wedding programs that were made from CD cases. Each female guest was gifted with a handmade bracelet, too. Male guests weren’t left out, as they received custom hats matching the baseball cap worn by Atkins.
The couple threw a pre-wedding bash on Saturday (Nov. 9), where friends and family spent the day fishing the waters surrounding Captiva.
Post-nuptials, the bride and groom returned to Nashville and will continue on the Most Hits for the Money Tour with Frankie Ballard in lieu of a honeymoon. It’s not that they’re not romantic — hardly.
“Our life is a honeymoon,” the couple insists.
Who needs a quick trip to the Bahamas when every day being is a delight? It’s the second marriage for him, and the first for the 29-year-old Falcon, who is known best for her single ‘Like Crazy.’