Hank Williams Jr. Set To Be Honored With Patriot Award 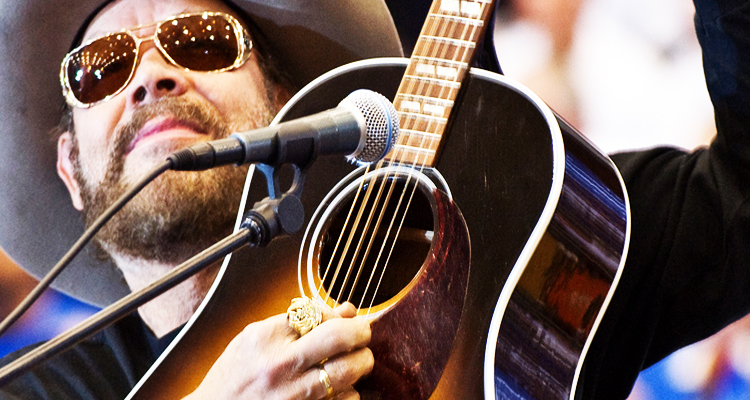 Nashville, Tenn. (November 12, 2013) – Operation Troop Aid (OTA), a nonprofit organization which supports deployed U.S. troops, set to honor Grammy, CMA, ACM, and Emmy award-winning entertainer Hank Williams Jr. with the 2013 Operation Troop Aid “Patriot Award.”  The presentation will take place on December 31st, when Williams headlines the New Year’ Eve ‘Bash on Broadway’ in downtown Nashville, Tennessee. Presented annually by OTA to celebrities that champion the men and women serving in the American Armed Forces, the southern rock and country legend was awarded the Eagle Trophy for his countless endeavors to support troops overseas and at local hospitals and for supporting numerous military charities. Well known for his role as an American Patriot, Williams, has performed at various military bases and continues to meet military personnel at every concert appearance.
“I am extremely honored to award Hank Williams Jr the 2013 Patriot Award.  His art, legacy of family and Spirit of Patriotism is exactly why this award exists.  He never forgot his roots and why we have the Freedom we do in America,” says OTA founder and executive director Mark Woods.
Williams will join past Patriot Award recipients Toby Keith, Darryl Worley, Aaron Tippin, Gary Sinise, Charlie Daniels, Mark Wills, and KISS.
About Hank Williams Jr.
Though he began his career in the shadow of his legendary father, Hank Williams Jr. emerged as a formidable Country singer-songwriter in his own right with 1960s hits such as “It’s All Over But The Crying” and “Cajun Baby.” But things changed with the 1979 release of “Family Tradition,” where he broke the Nashville mainstream by adopting a rebel image and writing/recording in a style incorporating his Blues and Southern Rock influences. The results were staggering as  42 Top-10 hits followed, two CMA Entertainer of the Year honors, three ACM Entertainer of the Year honors, multiple Grammy nominations and a Grammy award for “There’s a Tear in My Beer”, a duet with his father using electronic merging technology.
As groundbreaking as Hank Williams Jr. became, it wasn’t just his performance that people took note about, but rather his songwriting that became so notable. The driven musician penned hits songs year after year scoring 20 BMI Awards. One of the arguably most-heard Country song of modern times, the four-time Emmy award-winning “Are You Ready For Some Football?,” which was heard nationally as the theme song of ABC and ESPN’s Monday Night Football telecasts, was aired for 21 years.
As the accolades kept coming, Williams sold over 55 million albums, achieving gold, platinum, and multi-platinum status along with 13 of those albums hitting the no. 1 spot on the Billboard chart. In 2008, Williams was honored with the BMI Icon award at the 56th annual BMI Country Awards, joining an elite group of past honorees including Willie Nelson, Merle Haggard and Dolly Parton.
About Operation Troop Aid:

Founded in 2005 by 21-year military veteran, Mark Woods, Operation Troop Aid provides care packages for deployed U.S. Service Members with revenue generated through professional concert promotions and public financial generosity. OTA is a nonprofit corporation striving to make a positive difference and inspire the Armed Forces by letting them know Americans stand with them. OTA is a certified Combined Federal Campaign Charity – CFC #26493.
As an entertainment based charity, each year OTA selects and presents The OPERATION TROOP AID Patriot Award to an entertainer / artist that best exemplifies the spirit of Patriotic service to our Troops and Americanism in their art.  It does not necessarily reflect events in that year, as it may be a historical grouping of their achievements to promote our Troops and American Patriotism.  It is an award that embodies a sense of service, supporting our American Troops and an overall outlook of honoring our Constitution and promoting the Freedom that our Troops provide.
For more information on OTA, visit www.OperationTroopAid.org.