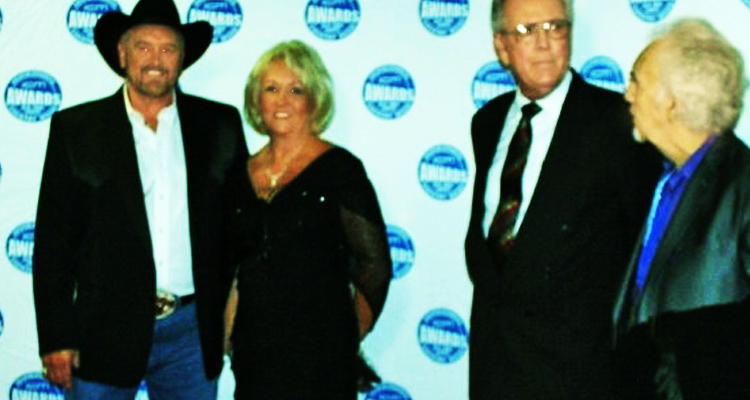 Chuck Hancock, Double C Recording Artist adds to his growing list of awards with two of ICM’S most prestigious awards as Songwriter and Inspiration Country Song for 2013 at this year’s 19th ICM Faith Awards.

Chuck is beginning to move forward in both Inspirational and Country with his great songwriting and performance of his music.  His performance of the award winning song “They Don’t Stay Little Long Enough,” is a message that fits every family with children, and Chuck’s delivery on the awards show on Thursday, October 24th was without a doubt the highlight of the evening’s entertainment.
He wrote the song with family in mind, of what it is like to see our babies grow up, turn into adults, and then leave the nest of love of their homes.  It is difficult to accept this, but Chuck wrote the story with the great tender loving care of his family values.
Chuck is now working on spreading the wealth of his music to mainstream artists for their consideration in reviewing his material for possible recording in their future projects.  With a new Country CD project almost completed and ready to go, and work on a new Inspirational Country CD, 2014 is going to be a banner year for Chuck Hancock, and no doubt will be another exciting time for Chuck at the ICM Awards Show, and other awards shows who are interested in having Chuck as a part of their shows also.  CHUCK HANCOCK AND 2014 WILL BE A SPECIAL YEAR FOR THIS TALENTED ARTIST.
The ICM Awards was well attended, and if this year is any indication of its continue success, 2014 will be a huge success.  The venue was perfect for this type of awards, with great seating, professional stage production, and one thing was so very noticeable was the great dress code of the entertainers and presenters, something missing in other awards shows!!!  The show was being taped for telecast at an air date which will be selected shortly, but I gave full numbers for the presentation and timing of the show.  Before I forget the Red Carpet was a super success with all artists in attendance getting time with the each individual interviewer, who I must commend for having done their homework with the artists they interviewed.
Highlights of the evening included Gene Higgins being presented with the “Living Legend Award,” as well as performances by Guy Penrod and special guest Sarah Darling, Dennis Agajanian , Aaron & Amanda Crabb, and Canton Junction. The star power did not end with performers. Presenters included American Idol’s Melinda Doolittle, The Voice’s Holly Tucker, Jim Ed Brown, Former NBA Player Mike Glenn and The Roys.
The 19th Annual ICM Faith, Family & Country™ Awards were presented by Samaritan’s Purse and Operation Christmas Child and Operation Troop Aid was this year’s charity of choice. Airing on The TCT Network, GEB America, National Religious Broadcasters (NRB), The Worship Network and Total Living Network (TLN), this year’s show reached a potential audience of 1.6 billion, it’s largest to date.