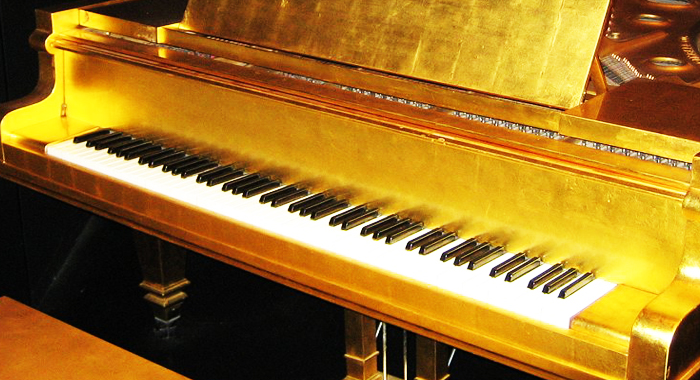 Terri Fenn has tried Craigslist. EBay. Mailers to record labels that include Disney, BMI and Sony. Phone calls and emails to the Grand Ole Opry, Graceland and wealthy private investors.
And still Elvis Presley’s famed 24-carat-gold-painted grand piano, a first-anniversary gift from Priscilla, sits in the Country Music Hall of Fame and Museum — for now.
Fenn, a Smyrna Middle School family and consumer science teacher, has until Sept. 3 to fulfill her contract to sell it, one she landed by being the friend of a friend and enjoying ties to Nashville’s music and real estate industries.
After that, it goes to a major auction house and, presumably, someplace other than the Country Music Hall of Fame.
“It could go to a Japanese investor. They love Elvis,” Fenn said. “Japanese are the number one collectors of Elvis stuff. I obviously have to sell it to whomever. But I think we could all agree that it should be at the Country Music Hall of Fame.”
She’s already been contacted by a producer from A&E “Shipping Wars,” wanting a heads-up when it leaves the hall.
The family of Russ Kemppel, an Akron, Ohio, businessman who died in January 2012, owns the piano. Kemppel bought the piano for $2 million. He moved it out of Graceland, Presley’s Memphis estate, 22 years ago and leased it to the hall for $1, said Scott Ferrell, Kemppel Industries’ CEO and executor of the estate.
Now the family would like to sell. Ferrell said he connected with Fenn in an effort to keep the piano in Nashville, but he’s given the required 90-day notice to end the hall’s lease.
Museum director Kyle Young issued a statement this morning:
“Though it wasn’t considered a key piece in the collection from an historical perspective —along the lines of Bill Monroe’s Loar, Maybelle Carter’s L-5, Earl Scruggs’ Granada or countless other instruments we display — nevertheless it is a marvelous piece of popular culture and our visitors enjoyed seeing it.
“We are grateful to the piano’s owners for loaning it to the museum for so many years and, if it does indeed sell, we will be sorry to see it go.”
Contact Heidi Hall at hhall@tennessean.com or 615-726-5977
Article sent in by Marty Martel