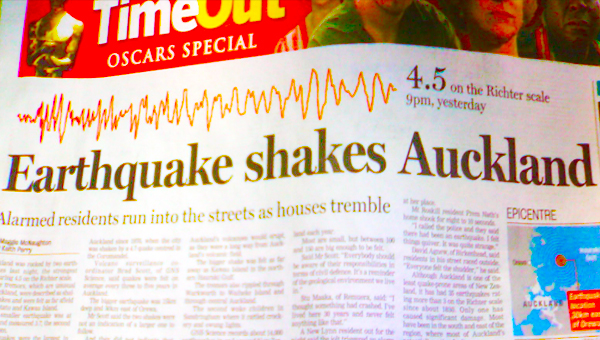 A “moderate” 3.9 magnitude earthquake that struck Auckland last week was the biggest in the city since February 2007, GeoNet says.

The tremor, which struck at 4.05pm, was five kilometres deep and was centred near Motatapu Island, 15 kms north-east of the city.

GeoNet described its intensity as “moderate”.

“It’s quite rare to get any felt events in Auckland, but occasionally we do have some like this,” said duty officer Nico Fournier.

He said the earthquake did not indicate an increase in volcanic activity under New Zealand’s biggest city, which is dotted with volcanoes.

“Because we have volcanoes in Auckland and then we had this earthquake it doesn’t mean the two are related. There is no indication of that.”

Further earthquakes were possible, he said.

“Usually when you get earthquakes there are aftershocks, so certainly in the next hours or days there is a possibility of further small earthquakes, but right now it’s looking pretty calm.

“There’s no indication that it will be the case, but we can’t exclude it.”

“We’ve had quite a few calls actually. No actual damage reported, it’s really just people after a bit of advice, confirming whether it was an earthquake, a little bit of panic,” he said.

“We’re just out of the city in Grey Lynn, and it certainly rocked the building here.”

Mr Phillips said the earthquake had triggered an alarm at a rest home in Howick, but no damage was reported.

He urged people not to clog up emergency lines if they did not need to, but they could call if they had damage to report or needed assistance.

Many people in central Auckland felt the quake.

Around five minutes earlier GeoNet detected another quake, measuring 3.3. It was centred 25 kms north-east of Auckland at a depth of 23 kilometres.

Many Aucklanders said they barley felt the first earthquake, but the second quake was much stronger.

Readers who emailed the Herald described it as being like a large truck going past, a gust of wind or a truck colliding with the house.

Bev Hooper of Stanmore Bay said she though the first quake was “a bit odd” but the second quake came as a bigger jolt.

“It felt like a truck had hit the side of the house. Just a hard jolt.”

Paremoremo resident Catherine Casey said she and her husband heard a “massive rumble” about 4.05pm.

“My husband thought it was a gust of wind but we had no wind. I said I think it was an earthquake … I am deaf in one ear but it was loud and I felt the vibration. I thought it was a tornado.”

A resident of Rothesay Bay on the North Shore said the second quake lasted from 30 seconds to a minute.

The walls of her lounge moved, shifting a painting, and the cups in front of her rattled loudly.

The earthquake was a first for Glenfield resident Maree Lawson, who has lived on the North Shore her whole life.

“Never experienced anything like that. I was watching a DVD on my bed, then the bed starts shaking like someone was underneath it … very freaky.”

Sunnynook resident Val said the quakes felt like “a very strong gust of wind shaking the house”. The floor moved rapidly for a few seconds and the cat fled as the house shuddered.

A Torbay resident said her whole room started shaking during the first quake.

“I thought someone just crashed into the house! It lasted for 10 seconds and when I looked outside everything was fine … About four minutes later, my whole house started shaking and I heard my siblings scream and I ran to their aid.”

Kim said she thought she’d had “one wine too many” until her neighbour confirmed her shock that there had been an earthquake.

“I believed my neighbour before I believed my husband. My chair shook and my glasses rattled. My neighbour’s whole house shook along with his blinds.”

The tremors have encouraged some Aucklanders to stock up on Civil Defence emergency supplies.

Glendowie woman Caroline Wood, who saw the walls of her house shake, said she would take the quake as a warning to be prepared.

That sentiment was echoed by Lisa West in Birkenhead, who felt a jolt and the kitchen rattled.

“Quite frankly it freaked me out, enough to shake me out of apathy with regard to sorting out a household plan for a civil defence emergency. I’m getting onto it first thing Monday!”

The earthquake has already prompted a Facebook page called “I survived the Auckland Earthquake”, where users are sharing humorous memes.

Within an hour of the quakes the page had more than 2000 likes on Facebook.

Auckland Civil Defence said small earthquakes are not unusual for Auckland. A similar swarm occurred over an evening in February 2007.

People who felt the earthquake are being urged to register it on GeoNet’s website by clicking the ‘Felt it?’ button.