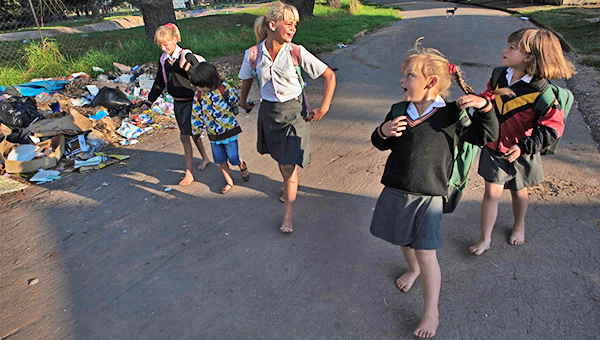 The housing crisis in South Africa is now taking on a new dimension. It is well-known that there’s a backlog in the building of houses for poor black South Africans.

What is not widely known, is the fact that the ANC Governments RACIST policies of Affirmative Action (Job Reservation) and BEE (Black Economic Empowerment) have caused severe POVERTY among AFRIKAANS people.

It is estimated that approximately 1 000 000 AFRIKAANS people are living in abject poverty, because of the these policies.

The ANC is now in a predicament. It will now have to cater for the needs of poor SOUTH AFRICANS from both the BLACK, as well as the WHITE communities. How will they solve the problem when they cannot even provide housing for the electorate, who have voted them into power?

It seems as if the situation is inevitable going to lead to a war over RESOURCES.

Resources that some BLACKS feel, should only be made available to them, as a RIGHT owed to them by the government that promised them houses. They also feel that the mandate given to the government DOES NOT INCLUDE the liberty to uplift the living conditions of POOR AFRIKANERS at the expense of that of BLACKS. It will be a disgrace if houses were to be made available to whites and have THEM benefit, instead of the hysterically (read historically) disadvantaged BLACK.

Afrikaners therefore have reason to fear being dumped in these squatter camps when the animosity towards their presence is now a well established fact. If one reads the commentary to the article it is VERY clear what blacks feel about this situation.

AFRIKANERS need a place of their own.

We need the freedom to live in peace amongst people of our own culture.

Why is this too much to ask?

Comment: WHISNews21 rejects the word “Afrikaner” given to the Boer Nation by the British after the Anglo Boer War. As the British ruled South Africa from 1900 to 1961 (and very possible beyond too) they wanted to destroy the identity of the Boer Nation and therefore with the help of the governments of the time created the word Afrikaner, and therefore wiped out the entire history and identity of the Boer Nation and successfully divided the white Afrikaans speaking population of South Africa till this day. Most Afrikaners today do not even know they are really Boers.

It is also to be noted that out of a total white population in South Africa of about 3  Million  almost 1 Million are without means to provide food and lodging for themselves and their families. This number is also growing by the day, as the situation gets worse.