My Son, My Son Father Cries After Finding His Boy 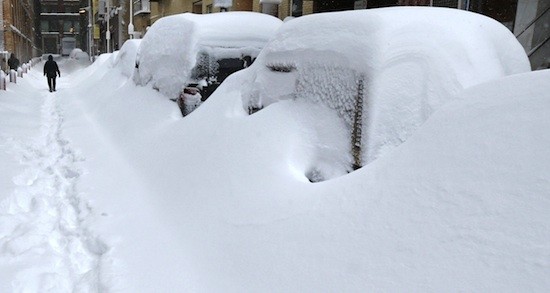 ‘My son, my son’ father cries after finding his boy

All three tragedies happened much the same way: People trying to warm up while they or their parents dug out their vehicle sought refuge in the car while its tailpipe was still blocked with snow.

“You’ve got to have ventilation (for exhaust) if you’re going to dig your car out,” state Fire Marshal Stephen Coan told the Boston Herald. “Clear out the exhaust vent first.”

In the first case an 11-year-old Massachusetts boy had been helping his father shovel the snow in the Dorchester neighborhood but got cold, so his father started the car and the boy got inside the vehicle, Boston Fire Department spokesman Steve MacDonald said.

Witnesses said that a snow plow had later come up the street and had pushed snow back onto the bank, which then impacted the car’s exhaust pipe.

Just a few hours later, a man in his early 20s was found dead in a car with the engine running in Mattapan, according to media reports. It’s believed the car’s tailpipe was blocked by snow, allowing the gas to build up.

Two other children, ages 5 and 8, were hospitalized Saturday night after getting in a car to keep warm while their father shoveled snow in East Boston, WBZ-TV reported.

Boston firefighter Octavius Rowe came came across the first tragedy when he noticed a commotion in the street while at home. He went outside and saw the father leaning against a pile of snow, Rowe said.

“I came over to the car where it all started and the father appeared to have lost consciousness,” Rowe said. “He was semi-conscious and laying on the snow bank, and I wanted to first get him off that cold surface.”

Rowe said he put the man on a flat surface to revive him. He said the boy apparently had been taken into an apartment building where a woman was administering CPR. Paramedics from the fire department and Emergency Medical Services arrived and provided oxygen to the father to stabilize him and tried to engage him in conversation to keep him alert.

“He was responsive so we were able to, at least, get him up, get him to the stairs. He did say, ‘My son, my son,’ so he knew his son was involved or was in distress,” Rowe said. “We were talking to him. He was moaning, but the only discernible thing that he said was ‘My son.’

No Comments to My Son, My Son Father Cries After Finding His Boy