Will The Cock Crow 3 Times Within The Next Hour 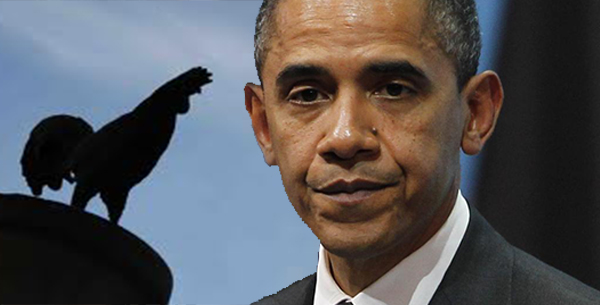 By JULIE PACE and KEN THOMAS

HENDERSON, Nev. — President Barack Obama has one mission heading into his first debate with Republican Mitt Romney: Don’t screw things up.
Five weeks from Election Day, Obama has political momentum and an edge in polls of the battleground states that will determine the election. But he’s sure to face a blistering challenge from Romney, who needs to use Wednesday’s debate in Denver to change the trajectory of the race.
Both parties say the first debate traditionally helps the challenger, whose stature tends to rise in the eyes of many voters by simply appearing on stage as the alternative. Seeking to mitigate that effect, Obama aides are working with the president on keeping command of the debate while not being overly aggressive.

The president retreated to a desert resort in Nevada for three days of intensive debate preparation for Wednesday night. He was joined by a cadre of top advisers, who are focused on helping Obama trim his often-lengthy explanations to fit the debate format.
Equally important is coaching Obama to look calm and presidential during an onslaught of criticism from Romney.Obama’s campaign has tried – to the point of hyperbole – to lower expectations for the president and portray him as an underdog who hasn’t had enough time to get ready. “He has had less time to prepare than we anticipated,” campaign spokeswoman Jennifer Psaki said Sunday. “It’s difficult to schedule significant blocks of time when you’re the president.” What the expectation-lowering aides leave out is that Obama, in fact, has had plenty of time to prepare at the White House and during long flights on Air Force One. And they never mention that only Obama, not Romney, has more experience with general election debates.
The president’s aides also have tried to set sky-high expectations for Romney, casting him as a strong debater who won the GOP nomination in part because of the way he dispatched his many competitors in the crucial primary debates.

“Mitt Romney … has been preparing earlier and with more focus than any presidential candidate in modern history,” Psaki said. “Not John F. Kennedy, not President Bill Clinton, not President George Bush, not Ronald Reagan has prepared as much as he has.”The most pressing task for Obama, who once taught law at the University of Chicago, is shedding his often wordy, detailed explanations in favor of tighter answers. Aides say Obama isn’t coming prepared with a series of “zingers,” just more concise descriptions of his positions and his criticisms of Romney’s.Despite Obama’s reputation as a gifted speaker, his 2008 debate performances were uneven.He stumbled in several multicandidate forums during the early days of the 2008 campaign, with his most prominent low point coming when Obama said, with a touch of sarcasm, that rival Hillary Rodham Clinton was “likable enough.” But the debates that fall against Republican John McCain helped Obama fend off suggestions that he was too inexperienced for the White House and show that he had what it took to be president.
Obama aides have been reviewing Romney’s debates, both in the 2008 and 2012 Republican primaries and from his statewide races in Massachusetts. They’ve also been studying recordings of prior presidential debates for signs of what pitfalls could face an incumbent. Aides say they’ve noticed Romney often launches a fresh critique against his opponent early in the debates, something that hasn’t been part of the campaign discussion thus far. During a primary debate earlier this year, Romney caught rival Newt Gingrich off-guard by bringing up investments he held in mortgage giants Fannie Mae and Freddie Mac.
Aides also are prepping the president for a moment they say Romney has already telegraphed: Accusing the president of lying about the Republicans’ positions.
“This is a guy who will not back off delivering the negative and that’s not the easiest thing to do,” said Tad Devine, a Democratic strategist who is not working with Obama’s team but advised the late Massachusetts Sen. Edward M. Kennedy in his 1994 Senate campaign against Romney.

Obama and Massachusetts Sen. John Kerry, who is playing Romney, have held several lengthy debate preparation sessions at the Democratic National Committee headquarters, a short drive away from the White House. Former White House aides Anita Dunn and Ron Klain have been brought in to help run the sessions.Obama’s preparations here in Nevada are expected to mirror his approach from 2008, when he got ready for the first debate against McCain at a hotel in Palm Beach, Fla. Obama’s campaign held daylong preparation sessions that included mock debates starting at 9 p.m., the same time as the actual debate. The practice debates were held on a replica of the debate stage “practically right down to the carpeting,” White House adviser David Plouffe wrote in his 2009 book, “The Audacity to Win.” The president’s team picked Nevada for this year’s debate camp in part because it’s one of the eight or so battleground states that will determine the election. Obama held a campaign rally in Las Vegas Sunday night and stopped by a campaign office in Henderson Monday to thank staffers and volunteers. He may make more local stops while he’s in town, all aimed at driving local media coverage.
Others leading Obama’s debate prep include senior campaign adviser David Axelrod, White House communications director Dan Pfeiffer and top economic adviser Gene Sperling. Obama’s chief of staff Jack Lew, campaign pollster Joel Benenson and speechwriter Jon Favreau are also assisting the president.