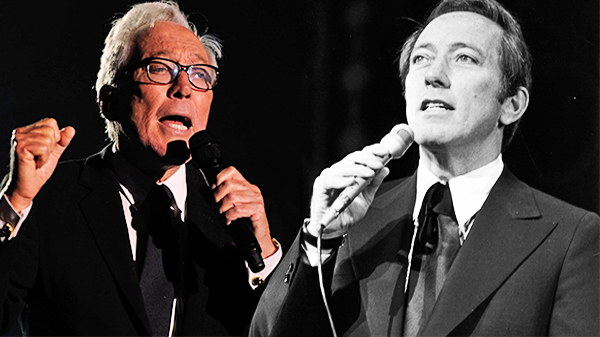 MAY HIS SOUL REST IN THE ARMS OF OUR BLESSED LORD AND SAVIOR.

With a string of gold albums, a hit TV series and the signature “Moon River,” Andy Williams was a voice of the 1960s, although not the ’60s we usually hear about. “The old cliche says that if you can remember the 1960s, you weren’t there,” the singer once recalled. “Well, I was there all right, but my memory of them is blurred – not by any drugs I took but by the relentless pace of the schedule I set myself.” Williams’ plaintive tenor, boyish features and easy demeanor helped him outlast many of the rock stars who had displaced him and such fellow crooners as Frank Sinatra and Perry Como. He remained on the charts into the 1970s, and continued to perform in his 80s at the Moon River Theatre he built in Branson, Mo. In November 2011, when Williams announced that he had been diagnosed with bladder cancer, he vowed to return to performing the following year: His 75th in show business.
Williams died Tuesday night at his home in Branson following a yearlong battle with the disease, his Los Angeles-based publicist, Paul Shefrin, said Wednesday. He was 84.
He became a major star the same year as Elvis Presley, 1956, with the Sinatra-like swing “Canadian Sunset,” and for a time he was pushed into such Presley imitations as “Lips of Wine” and the No. 1 smash “Butterfly.” But he mostly stuck to what he called his “natural style,” and kept it up throughout his career. In 1970, when even Sinatra had given up and (temporarily) retired, Williams was in the top 10 with the theme from “Love Story,” the Oscar-winning tearjerker. He had 18 gold records and three platinum, was nominated for five Grammy awards and hosted the Grammy ceremonies for several years.
Movie songs became a specialty, from “Love Story” and “Days of Wine and Roses” to “Moon River.” The longing Johnny Mercer-Henry Mancini ballad was his most famous song, even though he never released it as a single because his record company feared such lines as “my huckleberry friend” were too confusing and old-fashioned for teens. The song was first performed by Audrey Hepburn in the beloved 1961 film “Breakfast at Tiffany’s,” but Mancini thought “Moon River” ideal for Williams, who recorded it in “pretty much one take” and also sang it at the 1962 Academy Awards. Although “Moon River” was covered by countless artists and became a hit single for Jerry Butler, Williams made the song his personal brand. In fact, he insisted on it.
“When I hear anybody else sing it, it’s all I can to do stop myself from shouting at the television screen, ‘No! That’s my song!'” Williams wrote in his 2009 memoir, titled, fittingly, “Moon River and Me.”
“The Andy Williams Show,” which lasted in various formats through the 1960s and into 1971, won three Emmys and featured Williams alternately performing his stable of hits and bantering casually with his guest stars. It was on that show that Williams – who launched his own career as part of an all-brother quartet – introduced the world to another clean-cut act – the original four singing Osmond Brothers of Utah. Their younger sibling Donny also made his debut on Williams’ show, in 1963 when he was 6 years old. Four decades later, the Osmonds and Williams would find themselves in close proximity again, sharing Williams’ theater in Branson, Mo.
Williams did book some rock and soul acts, including the Beach Boys, the Temptations and Smokey Robinson. On one show, in 1970, Williams sang “Heaven Help Us All” with Ray Charles, Mama Cass and a then-little known Elton John, a vision to Williams in his rhinestone glasses and black cape. But Williams liked him and his breakthrough hit “Your Song” enough to record it himself.
Williams’ act was, apparently, not an act. The singer’s unflappable manner on television and in concert was mirrored offstage.
“I guess I’ve never really been aggressive, although almost everybody else in show business fights and gouges and knees to get where they want to be,” he once said. “My trouble is, I’m not constructed temperamentally along those lines.”
His wholesome image endured one jarring interlude. In 1976, his ex-wife, former Las Vegas showgirl Claudine Longet, shot and killed her lover, skiing champion Spider Sabich. The Rolling Stones mocked the tragedy in “Claudine,” a song so pitiless that it wasn’t released until decades later. Longet, who said it was an accident, spent only a week in jail. Williams stood by her. He escorted her to the courthouse, testified on her behalf and provided support for her and their children, Noelle, Christian and Robert.
Also in the 1970s, Williams was seen frequently in the company of Ethel Kennedy, Robert Kennedy’s widow. The singer denied any romantic involvement.
He was born Howard Andrew Williams in Wall Lake, Iowa, on Dec. 3, 1927. In his memoir, Williams remembered himself as a shy boy who concealed his insecurity “behind a veneer of cheek and self-confidence.” Of Wall Lake, Williams joked that it was so small, and had so little to do, that crowds would gather just to watch someone get a haircut.

Williams began performing with his older brothers Dick, Bob and Don in the local Presbyterian church choir. Their father, postal worker and insurance man Jay Emerson Williams, was the choirmaster and the force behind his children’s career. When Andy was 8, Williams’ father brought the kids for an audition on Des Moines radio station WHO’s Iowa Barn Dance. They were initially turned down, but Jay Emerson Williams and the young quartet kept returning and they were finally accepted, their show bringing them attention from Chicago, Cincinnati and Hollywood. Another star at WHO was a young sportscaster named Ronald Reagan, who would later praise Williams as a “national treasure.”
The brothers joined Bing Crosby in recording the hit “Swinging on a Star” in 1944 for Crosby’s film “Going My Way,” and Andy, barely a teenager, was picked to dub Lauren Bacall’s voice on a song for the film “To Have and Have Not.” His voice stayed in the film until the preview, when it was cut because it didn’t sound like Bacall’s.
Later the brothers worked with Kay Thompson of eventual “Eloise” fame, then a singer who had taken a position as vocal coach at MGM studios, working with Judy Garland, June Allyson and others. After three months of training, Thompson and the Williams Brothers broke in their show at the El Rancho Room in Las Vegas to a huge ovation. They drew rave reviews in New York, Los Angeles and across the nation, earning a peak of $25,000 a week.
Williams, analyzing their success, once said: “Somehow we managed to work up and sustain an almost unbearable pitch of speed and rhythm.”
After five years, the three older brothers, who were starting their own families, had tired of the constant travel and left to pursue other careers.
Williams initially struggled as a solo act and was so broke at one point that he resorted to eating food intended for his two dogs.
“I had no money for food, so I ate it,” he recalled in 2001, “and it actually was damned good.” A two-year TV stint on Steve Allen’s “Tonight Show” and a contract with Cadence Records turned things around. In the 1960s. Williams later formed his own label, Barnaby Records, which released music by the Everly Brothers, Ray Stevens and Jimmy Buffett.
Williams was a lifelong Republican who once accused President Obama of “following Marxist theory.” But he acknowledged experimenting with LSD, opposed the Nixon administration’s efforts in the 1970s to deport John Lennon, and, in 1968, was an energetic supporter of Robert Kennedy’s presidential campaign. When Kennedy was assassinated in Los Angeles in June 1968, just after winning the California Democratic primary, Williams sang “The Battle Hymn of the Republic” at his funeral.
“We chose that song because he used it on the campaign trail,” Williams later said of Kennedy, who had been a close friend. “He had a terrible voice but he loved to sing that song. The only way I got through singing in church that day was by saying, ‘This is my job. I can’t let emotion get in the way of the song.’ I really concentrated on not thinking about him.”
After leaving TV, Williams headed back on the road, where his many Christmas shows and albums made him a huge draw during the holidays. One year in Des Moines, however, a snowstorm kept the customers away, and the band’s equipment failed to reach Chicago in time for the next night’s show, forcing the musicians to borrow instruments from a high school band.
“No more tours,” Williams decreed.
He decided to settle in Branson, the self-proclaimed “live entertainment capital of the country,” with its dozens of theaters featuring live music, comedy and magic acts.
When he arrived in 1992, the town was dominated by country music performers, but Williams changed that, building the classy, $13 million Andy Williams Moon River Theater in the heart of the city’s entertainment district and performing two shows a night, six days a week, nine months of the year. Only in recent years did he begin to cut back to one show a night.
Not surprisingly, his most popular time of the year was Christmas, although he acknowledged that not everyone in Hollywood accepted his move to the Midwest.
“The fact is most of my friends in L.A. still think I’m nuts for coming here,” he told The Associated Press in 1998.
He and his second wife, the former Debbie Haas, divided their time between homes in Branson and Palm Springs, where he spent his leisure hours on the golf course when Branson’s theaters were dark during the winter months following Christmas.
Retirement was not on his schedule. As he told the AP in 2001: “I’ll keep going until I get to the point where I can’t get out on stage.”
Article send in by Marty Martel

No Comments to Andy Williams 'Moon River' Singer Dies At 84